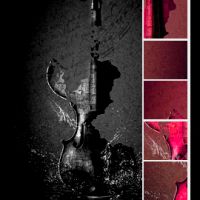 17-year-old Hong Kong Chinese violin prodigy Angela Chan (Jennifer Leong) has been studying music in America under a scholarship for the last year, and is now applying to an Ivy League university. She’s been invited to what she assumes is an admissions interview, only to find the Dean of Admissions, Birch Coffin (Teresa Banham,) waiting to interrogate her on her moral character. After spotting some gaps in her application Birch has discovered that Angela left her first Performing Arts High School after accusing a teacher of rape, an accusation that was never proven and has been hushed up; Birch is concerned the girl might be a fantasist and a potential liability. Angela turns to the college’s new Diversity Officer, Mercy (Debbie Korley,) hoping for a champion against an admissions officer she believes has made her mind up against her already.

Amy Ng follows up Shangri-La with a play that taps into very current issues around the #MeToo movement: Acceptance pits the two academics against each other over whether to believe Angela’s version of the story and whether, whatever happened, its aftereffects make her a suitable candidate. 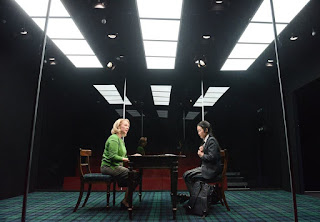 Its ambitions are a bit more complex than a simple mystery over who’s telling the truth though, and while I don’t think, given how these things play out in real life, that there’s much audience doubt that the assault actually happened, Ng keeps complicating the story and the characters’ reaction to it. Mercy assumes that as a black woman she’s giving Angela a fairer hearing and that Birch’s white privilege has blinded her (although ironically, as the college has a disproportionate amount of East Asian students, Angela doesn’t actually fall within her diversity remit.) 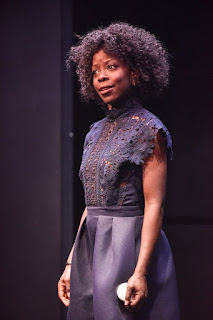 Banham gives a good deal of nuance to Birch though, suggesting that her cold demeanour hides someone who’s more interested in getting Angela to be honest with her than teasing out some kind of confession. As the details of the girl’s story start to muddy the simple headline, on the other hand, Mercy and her mentor Ben (Bo Poraj) start to get frostier towards her. Frankie Bradshaw has designed a traverse on which the action plays out behind glass, putting Anna Ledwich’s actors under the microscope; and Ledwich has subtly handled the play’s changing themes, wrangling with the intersection of racism, sexism (Ng suggests there’s a stereotype that East Asian women are sexually available,) and prejudice against mental illness. 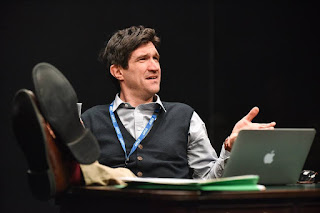 It’s frustrating, then, that the story ends up dominated by a predictable twist – about halfway through the play I started to worry that Ng was going to go there and was disappointed when she did. For the most part Acceptance goes in unpredictable directions, but with the urgency of this subject we’re likely to see a number of plays tackling it, and writers will need to find more than one ending for them.

Acceptance by Amy Ng is booking until the 7th of April at Hampstead Theatre Downstairs.