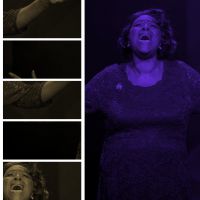 Daniel Evans' first season in charge of Chichester has already suggested he'll be following his predecessor in transferring a lot of shows to the West End: Quiz and King Lear are on their way, and Michael Longhurst's production of Caroline, or Change will follow them in the autumn, but first it has a sold-out run at Hampstead. Tony Kushner and Jeanine Tesori's musical, loosely inspired by Kushner's childhood and his family's maid, takes place in 1963 Louisiana, where Caroline Thibodeaux (Sharon D. Clarke) spends her days doing laundry in the sweltering basement of the Gellman family. Unlike most of the local maids, she wears her exhaustion and anger at hard work for little pay openly, which has got her a reputation as being particularly unfriendly and unlikeable. But the Gellmans' young son Noah (Aaron Gelkoff, alternating with Charlie Gallacher,) adores her, especially since his mother's death from cancer.

Noah's new stepmother Rose (Lauren Ward,) on the other hand, struggles to connect either with Noah or with Caroline and, upset that Caroline is underpaid but feeling unable to tell her husband to give her a raise, comes up with a plan to top up her wages while teaching Noah a motherly lesson. 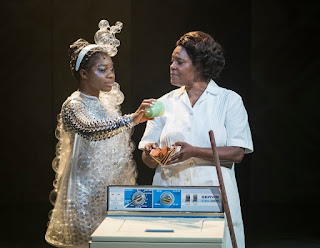 Finding it disrespectful that Noah leaves his loose change in his pockets for the maid to find in the laundry, Rose tells him that as a punishment, any change he forgets Caroline is allowed to keep. In fact, Noah sometimes leaves coins behind on purpose for her to find, and after some hesitation she uses it to treat her own children. When Noah genuinely forgets larger sums though, everyone's loyalties get tested. The story takes place against a backdrop of the Civil Rights movement, where in the wider sphere JFK is assassinated, taking with him his promises of help for black Americans; more locally (and in a storyline that mirrors events still in the news as recently as last year) a Confederate statue has been vandalised in protest. 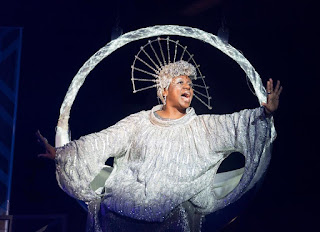 In what is perhaps not that surprising a twist from the writer of Angels in America, the story has a magical realist feel to it as Caroline gives personalities to everything from the Washing Machine (Me'sha Bryan,) to the Radio (a Motown-style backing trio of T'Shan Williams, Sharon Rose and Carol Stennett) and the Moon (Angela Caesar.) Most are benign presences she's created to keep her company, but the Dryer (Ako Mitchell,) which only makes the basement hotter than it already is, is a demonic presence. Fly Davis' kitschy designs bring all this to life with an authentically 1960s feel - perhaps with a touch of '60s sci-fi suggesting the hopes for a better future. Caroline, or Change looks at a generational difference, as the title character's rage at her oppression is pushed down inside her until it bursts, while her daughter Emmie (Abioma Omonua) is more actively involved in the Civil Rights moevement. Probably the highlight of the evening comes at a Hanukkah dinner where Emmie clashes with Rose's father (Teddy Kempner,) an old-fashioned Jewish Communist who believes Martin Luther King's peaceful approach is doomed to fail. 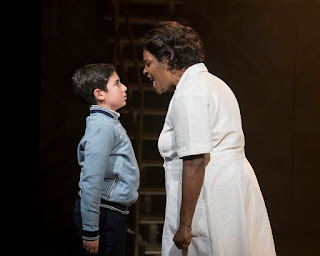 Longhurst's production strikes a balance between the powerful and the quirky, and this is the sort of role Clarke was born to play - being sung-through, there's not a lot of moments for end-of-song applause, but she deservedly got a couple of ovations for her big numbers. I was less sold on Tesori's songs themselves: I'm not often a fan of musicals that rarely resolve themselves into an actual song, and this one refuses to do so to the point that it feels almost deliberately frustrating. Impressive story, production and performances, but all set to music I found hard to like as much.

Caroline, or Change by Tony Kushner and Jeanine Tesori is booking until the 21st of April at Hampstead Theatre (returns only,) and from the 20th of November to the 9th of February at the Playhouse Theatre.