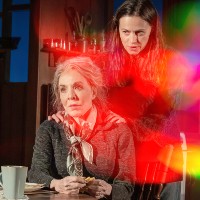 Marsha Norman's 1982 play is called 'night, Mother, because one of the cast is called Night, and the other one's Alicia Florick's mother. Its return to Hampstead Theatre, where it received its UK premiere, makes for another piece of evidence in my ongoing thesis that the Pulitzer is a booby prize as, despite the efforts of Roxana Silbert's production and its cast, it remains baffling to think the play itself is ever staged, let alone got singled out for a prestigious award. Set in a remote farmhouse, Jessie (Rebecca Night) moved back in with her mother after her divorce, supposedly to help look after her. But Thelma (Stockard Channing) seems very sprightly and capable, and as her daughter is very much aware, caring for her is essentially an excuse to try and keep her busy - Jessie has epilepsy which seems to have dominated her life, and the recent problems in her personal life have only made her retreat further from the world.
The play opens with Jessie asking for help locating her late father's gun, before blandly announcing she'll be using it to kill herself shortly. She's only telling her mother so it doesn't come as a shock, and maybe they can talk for a bit before the end. 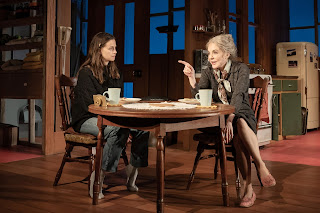 Of course the horrified Thelma tries to talk her out of it at first but, with Jessie warning her that if she tries to phone for help she'll only do it sooner, she settles down to the traumatic conversation, perhaps convincing herself it isn't real. It's a dark but intriguing premise which goes precisely nowhere, as the ensuing conversation brings little insight into Norman's characters, their relationships and their motivations. Instead Jessie focuses on the list she's made of things her mother will need to do for herself from now on, a strategy for who to call and what to say after her suicide, as well as a few questions she's always wanted to ask, about people the audience don't know and couldn't conceivably care about. Also the pair seem to subsist on an entirely sugar-based diet, which can't be helping things. 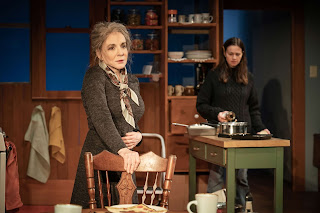 There's no answers to why Jessie would rather be dead than alive, and on the one hand it's admirably honest and important to show how depression sometimes just is, and can't be picked apart into reasons and explanations; the trouble is the way we're shown this is inherently undramatic. Similarly, Night's dead-eyed expression and flat, disconnected delivery feel chillingly accurate, but don't exactly lend themselves to dramatic highs and lows. Channing is tasked with delivering these on her own, but despite heroic efforts there's only so much she can do. 'night, Mother's premise is utterly devastating; the execution of the rest of the evening immediately strips it of its power.
'night, Mother by Marsha Norman is booking until the 4th of December at Hampstead Theatre.
Running time: 1 hour 25 minutes straight through.
Photo credit: Marc Brenner.
Posted by nick730 at 22:09