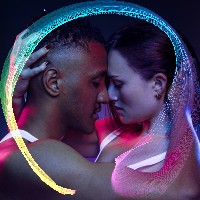 Philip Ridley is a playwright whose work often comes round to the same themes, subtly in some, crystallising elsewhere. As its title suggests, Tender Napalm is perhaps the play where the poetic clash between sex, love and violence comes most to the fore, in its duologue between a couple holding onto each other for comfort, perhaps even for survival, in the wake of a personal tragedy. The Man (Jaz Hutchins) and Woman (Adeline Waby) start by flirting with each other, if the extremes of sex and violence they fantasise about can be called flirting: She loves his eyes so much she wants to scoop them out with a spoon; he wants to tenderly push a bullet into her mouth, never mind where he wants to shove a hand grenade. They paint a number of fantastical scenarios for themselves, involving fairytale parties and alien abductions, but the main one is the magical island where they've been deposited by a Tsunami.
If you weren't in the mood to delve deeper, this is the sort of play where you could just sit back and take in the twisted poetry and fantastical imagery conjured up by the actors, who throw themselves into the roles here. 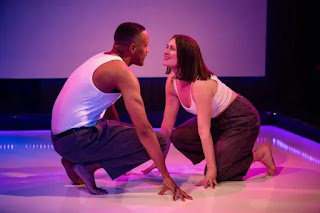 But it's also one whose real meaning is always revealing itself, and exposing a couple whose love for each other is strong, but under a lot of pressure from external factors. Both the fantasies and the combative element to their relationship are coping mechanisms, because for all that it sometimes seems like they hate each other, they need each other to get them through the loss of their daughter. Ridley's violent poetry deconstructs itself as the couple eventually relive their first meeting, and we see the real-life elements that would eventually build their fantasy worlds. 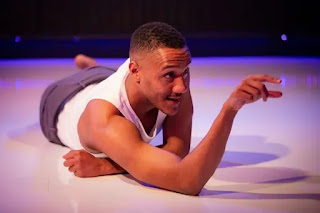 Max Harrison's is a tenth anniversary production, which Ridley himself apparently tapped him to direct, and it plays out on a much smaller stage at the King's Head than the original staging at the old Southwark Playhouse main house. I remember that involving a lot of running around each other on a large traverse, so I was impressed by how well Harrison and his actors managed to bring an equivalent level of energy and physicality here; quite a lot of that involves acting out the motions in their fantasy narrative, which I was worried would get a bit tiresome, but as the play goes on they find a more expressionistic physical language of their own. 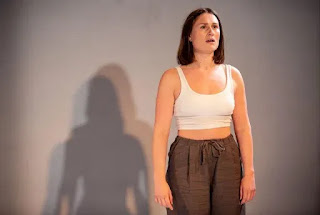 The original production ran twice, with different casts, and one fascinating thing about the play is how the same script can take on hugely different emphases: When I saw the first cast the play felt like a metaphor for the rhythms of the pair having sex, while the second cast made it abundantly clear that the source of the couple's pain was their daughter's death in an explosion - a decade ago terrorism was still an underlying theme to a lot of work. Here the details of the couple's traumatic event feel more nebulous again, and the focus becomes their more day-to-day problems with continuing to deal with the loss: The Man has recently returned home late and drunk, and the interaction we witness is both a fight and the makeup sex that they hope will keep them together, supporting each other (he's on the receiving end of most of the violence, as he's the one who has something to atone for most recently.) A strong production in its own right, this new Tender Napalm also serves as a new prism through which to refract the work and the extraordinary variety of meaning it contains.
Tender Napalm by Philip Ridley is booking until the 20th of November at the King's Head Theatre.
Running time: 1 hour 20 minutes straight through.
Photo credit: Mark Senior.
Posted by nick730 at 17:51