Theatre review: The Shark is Broken 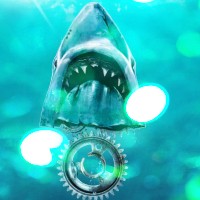 Big name stars are one way of getting bums on seats, but less well-known actors can also fill a theatre if the subject matter is one enough people care about, like a beloved film. There's no shortage of outright stage adaptations of movies, musical or otherwise, but The Shark is Broken takes a different tack, by taking us behind the scenes of the movie credited with inventing the summer blockbuster - and as the cast end up discussing, a new kind of movie where you don't need famous actors to draw in the crowds. The movie is of course Steven Spielberg's Jaws, and the shark in question is a mechanical one; or actually three mechanical ones, all known as Bruce, and all prone to breaking down at the same time, driving the shoot over schedule and over budget, and leaving its three lead actors stuck in a small boat with little to do for days on end. Ian Shaw co-writes the play with Joseph Nixon, as well as playing his father Robert Shaw, the English classical actor who would be best remembered for his role as gruff shark hunter Quint.
The premise is simple and the play pretty much does what it says on the tin: Shaw and his co-stars spend hours every day on the boat, waiting for Spielberg and the crew to tell them they've managed to set up a shot long enough to shoot a few moments of the film. 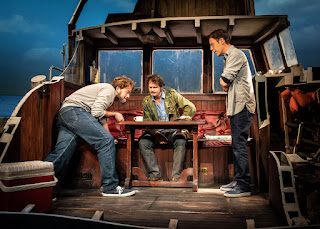 On top of the mechanical sharks the weather, light and bureaucracy of the local town also conspire to keep the men waiting endlessly between takes, and although they're on reasonably good terms, the pressure starts to cause friction, especially between the alcoholic Shaw and the young, neurotic Richard Dreyfuss (Liam Murray Scott.) Playing peacekeeper more often than not is the sensible, rather dull but likeable Roy Scheider (Demetri Goritsas.) Based on Robert Shaw's diaries from the time, the play could have gone in a Beckettian direction and used the men's boredom to explore existential themes; thankfully the writers have opted for a more straightforward comedy. 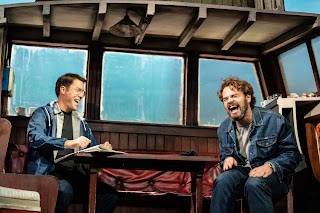 Not that there isn't a heartfelt side; there's a genuine affection for Shaw's father, who's shown as frustrated at having to make what he sees as a B-movie that's guaranteed to flop, impatient with Dreyfuss' declarations of wanting to play great theatrical roles without ever having put the time in on stage, and taking almost mischievous pleasure in creating an enigmatic persona for himself. But it also doesn't shy away from the darker side of him, particularly his drinking and the way he's haunted by his father's suicide when he was a child. Dreyfuss is the thorn in his side but essentially well-meaning, a mix of arrogance and paranoia that's unlikely to be completely unrelated to all the cocaine he's taking when they get back to land in the evenings, and increasingly on set as well: His misguided attempts to help Shaw with his drinking problem are ironic considering how cavalier he is with the drug addiction which would derail his own career a couple of years later. 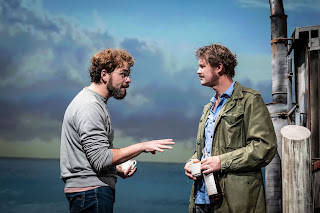 But for the most part this is about providing a light-hearted take on a classic film, and reveal a few secrets of the troubled shoot that led to a genre-defining hit (infamously, the inability to get the shark on screen for more than a couple of scenes ended up being credited with much of the film's menace.) I could have done without quite so many jokes relying on the audience knowing about future events ("Steven's planning a film about aliens? What next, dinosaurs?") but for the most part it's very funny, character-led comedy as the three men (or two of them at least) clash, but even as things get increasingly aggressive there's still the feeling that they'll eventually part with affection. 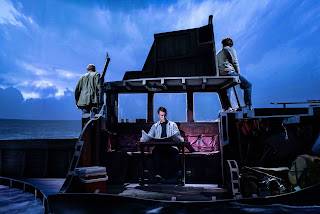 In a play about people being permanently bored in a small space Guy Masterson's production avoids actually becoming boring itself, and the design helps the visuals from becoming too claustrophobic: Nina Dunn's projections work flawlessly both behind and in front of Duncan Henderson's boat set to place it in the middle of the sea, and even give the illusion of it being buffeted by the waves at times. And that boat interior develops a personality of its own - the actors occasionally have to scramble around the boat to get back to the crew, but for the most part they're in the cabin where Ian Shaw will eventually recreate his father's most famous speech from the film, and the tiny space seems to get larger as Robert Shaw finds increasingly creative hiding places for his booze. The Shark is Broken plays to the audience's nostalgia in the right way, giving us an entertaining behind-the-scenes look; and while both Ian Shaw's writing and performance are affectionate towards the father he can't have known too well (he would have been 8 when Robert Shaw died,) it's spiky enough not to tip over into hagiography.
The Shark is Broken by Ian Shaw and Joseph Nixon is booking until the 15th of January at the Ambassadors Theatre.
Running time: 1 hour 40 minutes straight through.
Photo credit: Helen Maybanks.
Posted by nick730 at 23:08