Theatre review: What If If Only 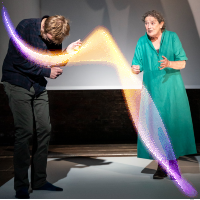 If Caryl Churchill's career wasn't already distinguished enough, in recent years it's also become notable for her work's increasing brevity - slowly but surely she's moving towards the point where she can emotionally devastate you in under a minute. What If If Only brings us to the 20-minute mark (positively epic compared to the 14 minutes originally advertised,) and it manages a feat that's both impressive and, annoyingly, virtually impossible to convey in a review: Being completely nebulous in its content, yet crystal clear in its intentions and emotional impact. In Churchill's surreal, political ghost story, Someone (John Heffernan) is at his dinner table mourning the loss of a loved one to suicide, still talking to them and wishing they could return. A ghost does materialise with some resemblance to the person he lost, but she's not quite right - she's older, like a future version who never got to exist.
In fact Linda Bassett's character soon reveals she's not even a figure from the future, but actually is the Future; or at least a possible Future, one that would really like to be the one that becomes real. She's comparatively benign if not downright Utopian, honest. 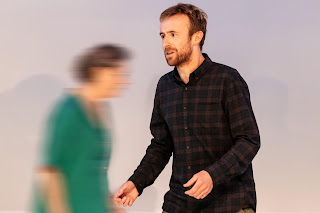 As the title suggests, the play is about the "bargaining" stage of grief, on a literal and personal level of someone wishing for their loved one back and wondering what could have been different, but the Future Bassett represents is also a global one. It's a very 2021 play, balancing hope with despair over the bright futures there might have been, and trying to select, from increasingly limited options, the best possible one. Eventually, B stops playing the Future and becomes the Present. 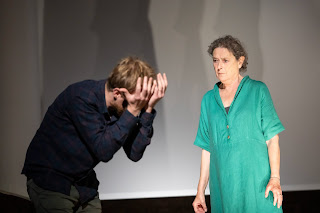 Regular Churchill collaborator James Macdonald directs a simple production on Miriam Buether's white box set, that conveys both the intimate and global concerns of the play through its two central performances: Heffernan's quiet, contained grief means that even after the play's revealed its wider themes it still works as a study of one person's private tragedy; Bassett's expansive, fantastical Future contains multitudes that give us the wider concerns. If there's anything predictable about Churchill's work, it's the ability to give you so much to unpack in so little time - a 20-minute play with a 6pm start time is only going to be seen by people who can arrange their schedule around it, but those who can won't forget it in a hurry.
What If If Only by Caryl Churchill is booking until the 23rd of October at the Royal Court's Jerwood Theatre Downstairs.
Running time: 20 minutes straight through.
Photo credit: Johan Persson.
Posted by nick730 at 18:42