Theatre review: How To Survive An Apocalypse 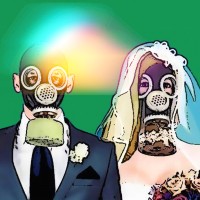 After a longer closure than most theatres, and not one but two productions of Not Quite Jerusalem getting postponed by Covid, the Finborough finally reopens, at a reduced capacity due to the venue's intimacy (so, only four people per three-seater bench.) With that relaunch show falling foul of a positive test result, we're straight in to one of the Finborough's familiar remits, that promotes work from Canadian playwrights. And Jordan Hall's How To Survive An Apocalypse does have a suitably ironic title for a theatre coming out of lockdown, although it dates from 2016; and while there's little about it that couldn't happen today, Jimmy Walters' production doesn't update the timeline. Probably because no mention of Covid would be unusual in a play whose characters start to become obsessed with possible world-ending scenarios. To start with, though, the lives they're used to are under threat from much more mundane financial pressures.
Tim (Noel Sullivan) is a computer game developer who's recently lost his job; his wife Jen (Kristin Atherton) is the editor of a failing lifestyle magazine and, worried that they might lose their one remaining source of income, is trying to relaunch the title with the help of a consultant. 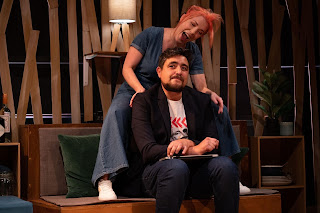 But under the corporate surface, her new colleague Bruce (Ben Lamb) is a survivalist who not only convinces her to rebrand the magazine as a guide for millennials who want a stylish way to live off the land in the event of civilisation's collapse, but also to start stockpiling and learning survival skills herself. But Bruce also represents the kind of handsome douchebag Jen used to be attracted to before she married Tim, and with her marriage under strain she's tempted to fall into bad habits. Meanwhile her new obsession inspires Tim to develop a simulation game of how well they'd survive the Apocalypse, and he's disturbed to find that in every scenario his wife would leave him. 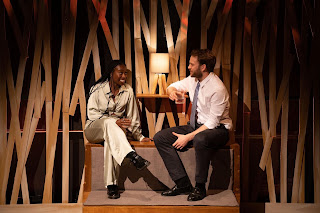 In Hall's comedy-drama, the real apocalypse is of course the one looming over the marriage, and Atherton and Sullivan quickly set the couple up as one worth caring about - married perhaps a bit too young, Jen is starting to wonder if rather than finding the love of her life she just settled on Tim because she thought that wherever she goes he wants to be there, whatever she does he's always gonna be there, pure and simple he'll be there for her; only to discover that he too has his limits. I was less convinced by the idea that Bruce was such a catalyst in the relationship falling apart though - the combative relationship between him and Jen doesn't really have a romantic spark. Although when (spoiler alert) they do inevitably end up sleeping together, Jen's grudging admission that Bruce is good in bed is a great gag ("yes, yes, you really know how to put your penis in a woman.") I'm not sure how much I buy Bruce as a character full stop: He's a survivalist who can't have a professional conversation without turning it round to how he can kill his own food, but he's also such a corporate suit he needs it explained to him that not everyone wears a tie to dinner? 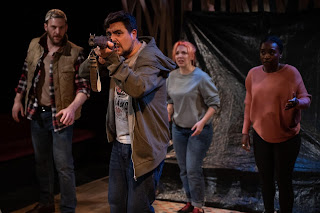 The play is likeable and has some fun comic moments: There's a nice final setpiece when the couple, accompanied by Jen's best friend Abby (Christine Gomes) follow Bruce into the woods for a survival retreat; when everything falls apart I enjoyed how realistically crap everyone's attempts at fighting were. But it's an energy level I thought was lacking a bit elsewhere in the play; it spends a bit too much time on the red herring of an actual apocalypse to get you totally invested in the relationship it's actually about. Even though the play's only five years old, I imagine it would be very different if written today, and when we've spent the last couple of years hearing about potential environmental or disease-based apocalypses, using it as a comic metaphor feels weird. In a 2021 draft Hall might toy more with putting the characters' survival skills to the test for real.
How To Survive An Apocalypse by Jordan Hall is booking until the 23rd of October at the Finborough Theatre.
Running time: 2 hours 15 minutes including interval.
Photo credit: Sam Taylor.
Posted by nick730 at 18:34