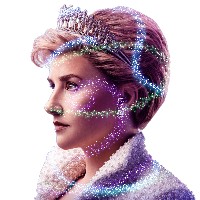 On the one hand, mere days after its release, what could I possibly have to say about Diana the Musical that hasn't already been said? On the other this is a theatre blog that, over the last 18 months, has by necessity had to diversify into a lot more on-screen theatre, and it's one hell of an elephant in the room to try and ignore: David Bryan (music and lyrics) and Joe DiPietro (book and lyrics) have collaborated on musicals before, scoring a big international success with Memphis and more of a cult hit with The Toxic Avenger. Their latest work hits some kind of cursèd sweet spot between "obvious cynical moneymaker" and "obvious terrible idea" to give the musical treatment to the life of Diana, Princess of Wales (Jeanna de Waal,) and especially her miserable marriage to Prince Charles (Roe Hartrampf.) As if what Diana's life really needed was another car crash.
Regular readers of this blog might both recall that my biggest fascination with the musical Chess is that I have no idea at any given moment just how seriously we're supposed to take the song "One Night In Bangkok." Well, Diana the Musical is like that, but for the entire two hours. 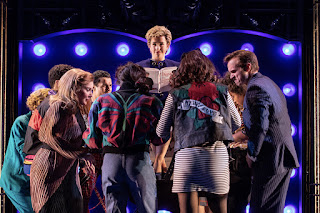 When I first heard about it, including some of the song titles, it sounded like an obvious spoof; but the thing is, it's American, and while I can easily imagine a British creative team going for a bit of bad-taste black comedy, the impression I get is that Diana's still a subject that Americans wouldn't out-and-out take the piss out of. And watching Christopher Ashley's production, although there's moments that are deliberately tongue-in-cheek, most of it seems deadly earnest. And obviously those are the funniest moments, right from when de Waal first appears with a deer-in-the-headlights gaze that she keeps frozen for two hours. Hartrampf, at least, bears an uncanny physical resemblance; unfortunately it's not to Prince Charles but to Chris Barrie, so if the songs fail to provide anything memorable at least you can get the Arnold Rimmer song stuck in your head instead. 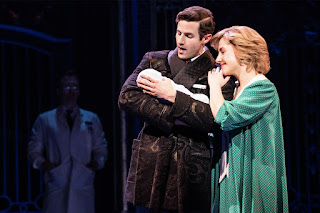 More reliable than a garden strimmer
This kind of resists reviewing to be honest, all I can do is list particularly baffling moments. I'm sure this is best enjoyed with friends while drunk, but even sober and alone I cackled out loud at Kelly Devine's choreography, which features so much head-popping the ensemble will need treatment for whiplash. "This Is How Your People Dance?" This is how people who are being electrocuted dance. There's also Diana's fateful first meeting with THE WELSH, who are apparently a row of angry peasants immediately softened by her uttering her catchphrase "Helleau, I'm... Diana." (Charles is furious because THE WELSH now like her more than him.) The press meanwhile get a more abrupt "Please sod orf!" and the script definitely had a draft that said "insert British word here" a lot, because there's a slew of random "bloody bonkers sodding bloke," as well as a great deal of "feck," because presumably at some point a memo landed on the wrong desk. 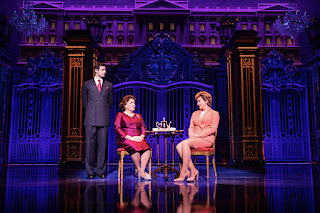 He's never been mistaken for Yul Brynner
Judy Kaye's Elizabeth II is a Sherman Tank crashing around the stage, issuing orders for Charles to hurry up and marry someone, anyone will do. Erin Davie's Camilla is permanently at Charles' side hissing evil plans at him like Iago on Jafar's shoulder. James Hewitt (Gareth Keegan,) bursts in at the top of Act 2 shirtless, and Diana spends her scenes with him staring at his crotch and dribbling. Paul Burrell strikes me as the litigious type, so I imagine Bruce Dow should prepare for an unwelcome call sometime soon. When Diana needs to make a phone call she pops into a red phone box that's floating round the stage. The biggest missed opportunity is failing to have Barbara Cartland played by an actual drag queen, at least that way some of... all this, might have seemed intentional. And if you think this is an unequivocal "so bad it's good" recommendation, the show is overlong; or at least by the last half-hour I was exhausted. 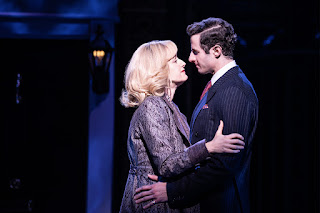 His head's not bald and it doesn't glimmer
In fairness I'm not the target audience, in that I don't drink, I know what British accents are supposed to sound like, and I was conscious when I watched this. So I'm just going to finish off listing particularly memorable lines. Is there an "out of context Diana the Musical" Twitter account yet? Because I think they'll have plenty of material.
"Too many bows, too many ruffles, too many frilly, frumpy fruffles."
"Makeup is one thing I know."
"Harry, my ginger-haired son, you'll always be second to none."
"It's a thriller in Manila with Diana and Camilla."
"Serves me right for marrying a Scorpio."
"BUT THEN THE KING DIED!"
"Oh, oh, oh, you're completely mad."
And the line that made me have to pause for five minutes because I was laughing so hard at the sheer banality of Andrew Parker-Bowles' (Zach Adkins) response to the Royal Wedding, watched on TV by millions of people worldwide:
"Seems as if your friend had a memorable wedding."
Diana the Musical by David Bryan and Joe DiPietro is streaming internationally on Netflix, and is booking from the 2nd of November at the Longacre Theatre in New York.
Running time: 2 hours.
Photo credit: Evan Zimmerman / Matthew Murphy.
Posted by nick730 at 20:29