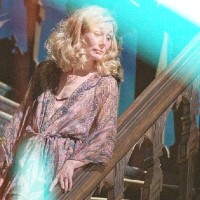 The world may be far from out of the pandemic woods yet, but in some parts of the theatrical landscape nature is healing: After a few months' honeymoon period, the papers have gone back to announcing that Rufus Norris has scheduled a show that will single-handedly bring down the National Theatre (a feat even Damned by Despair couldn't manage, calm down.*) The latest recipient of this dubious honour is Manor, Moira Buffini's new topical - perhaps too broadly topical - play that sets a political crisis against the backdrop of the climate crisis. Diana (Nancy Carroll) is the heir to a crumbling manor house somewhere near the coast, where she lives with her ageing rocker husband Pete (Owen McDonnell) and their daughter Isis (Liadán Dunlea). As a catastrophic storm destroys the area and threatens to flood the grounds, a number of unexpected guests seek shelter - not great timing, as Diana's just accidentally pushed Pete down the stairs during an argument, killing him.
Joining the family, and the body left cooling on the kitchen table, are local vicar Fiske (David Hargreaves,) Ripley, a South London hospital nurse on a poorly-timed holiday with her daughter Dora (Michele Austin and Shaniqua Okwok playing mother and daughter on stage for a second time,) and Perry (Edward Judge,) aka a fat man stuck in a hedge. 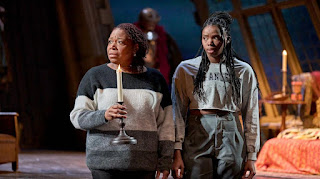 But the most disruptive arrival is Ted (Shaun Evans,) the leader of a new far-right party that's been gradually gaining traction and notoriety, along with some of his retinue. Some of the people in the manor instantly know who Ted is and are on their guard, but Diana isn't aware of his reputation and, both shaken and somewhat elated by the sudden death of a husband she hated, is vulnerable to being seduced, both literally and metaphorically. Ted sees getting in with Diana as a route to respectability, and the house as a potential base of operations that fits into the image of England his party fetishises†. 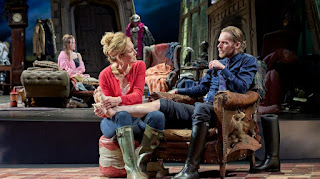 The curtain rising on Manor is a bit of a coup in itself, as it reveals Lez Brotherston's towering crooked house set, conveying the grandeur and decay of the setting, and some of the madness of the events that'll play out there as some of the characters fall for Ted's rhetoric and easy answers, and others try to fight back against the danger he poses. Dora in particular is keen to explore if Ted's mixed-race lackey Anton (Peter Bray) can be convinced he's being used as a prop to make the party appear less racist. Meanwhile it becomes increasingly apparent that Ted might just be the charismatic mouthpiece, and that his blind, downtrodden girlfriend Ruth (Amy Forrest) is the fascistic true believer quietly riling everyone up. 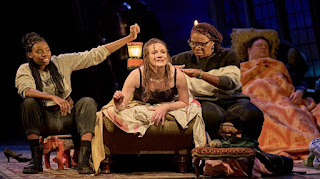 The production's directed by the playwright's sister Fiona Buffini, and who knows if that makes it more or less likely that the script will have been picked apart and edited; all I know is that the end result that's made it on stage is entertaining enough, but unquestionably messy, and not just in the obviously intentional ways. The first act has its wobbly moments but is certainly engaging, while it's in the second that it's more apparent that Buffini's thrown a bit too much at the stage: It often happens in plays that try to explore all the topical concerns occupying people's minds, and the apocalyptic storm might have been better left as an unspoken backdrop to the political storm, rather than having climate change brought up in quite so many arguments. 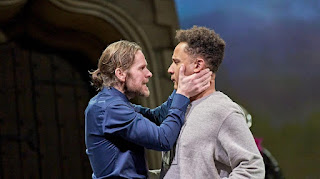 There's also a half-hearted ghost plot and a surprise!lesbians revelation which feels distinctly like not quite knowing how to end a scene, and some of the characters are definitely more fleshed-out than others - Dunlea struggles to make anything out of Isis, who's clearly in the story just to provide a reference to her generation's climate concerns‡. But though flawed Manor is certainly watchable - apart from a few long-winded scenes of the second act it doesn't commit the sin of being dull, and its exploration of some of the nastiest prejudices underlying English society comes with a helping of dark humour. It's perhaps strongest in its portrayal of how Ted and Ruth recruit and manipulate the vulnerable Anton and Perry, and the contempt they have for them in reality; that might have been the ideal area to focus the whole thing on. I won't argue that Manor is the best thing I've seen on stage in recent weeks; but it's certainly not the worst.
Manor by Moira Buffini is booking until the 1st of January at the National Theatre's Lyttelton.
Running time: 2 hours 30 minutes including interval.
Photo credit: Manuel Harlan.
*also, RuNo's about to direct a musical he co-wrote with his wife, all that needs to do is put a single foot wrong and it's an open goal, some people are so impatient
†speaking of fetishes, I think a woman sitting behind me had a combination of foot fetish and major crush on Shaun Evans given the very... specific kind of grunt that followed him saying he was taking his shoes off to get his sprained ankle seen to
‡also, characters on stage and screen need to stop telling the bad guy they've got a load of incriminating evidence on this phone or laptop right here, that they haven't quite had the chance to back up yet
Posted by nick730 at 23:34