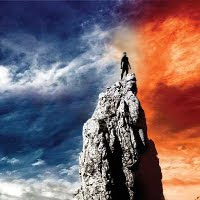 "Ooh, Betty, they're going to hang me in the morning!"

With Our Class, Eurydice and his take on Ghosts, Bijan Sheibani was shaping up as one of my favourite directors, with a talent for bringing out the best in what looked like unpromising subjects; but in the last year or so his name has been attached to more than its share of stinkers, especially at the National Theatre. Meanwhile Sebastian Armesto is an actor I like, but who also seems to have been plonked by the National into some of its more unremarkable, at best, stuff. So a production on the National's biggest stage, directed by Sheibani and starring Armesto would seem, to a superstitious person, to be some kind of omen of disaster. But just because mystical signs seem to be predicting a horrible doom doesn't mean you have to act accordingly, does it? So along I went to Damned by Despair, this year's final Travelex production.

Paulo (Armesto) is a devout man who's spent the last ten years as a hermit, living in a cave and praying, the only person he ever sees being Pedrisco (Rory Keenan,) who lives in the next cave along and seems slightly less enthusiastic about the the whole monastic life but goes along with it for reasons I'm not that clear on. When Paulo's faith wavers for a second, the Devil (Amanda Lawrence - another good actress with a shaky track record) takes the opportunity and appears to him as an angel, announcing that the fate of Paulo's soul is inextricably linked to that of a man called Enrico - if Enrico goes to heaven, so does Paulo. But a visit to Naples reveals Enrico to be a mass-murdering gangster, and with his damnation seemingly sealed the hermit decides to abandon all hope, embrace his fate and live the rest of his life as a vicious bandit. 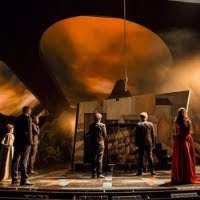 Social media can make it hard to avoid going into shows with preconceptions, as I would like to. So, even without reading any reviews or commentary, it was hard to miss the torrent of hatred Damned by Despair has attracted in previews. But at least going in expecting the worst means there's room for improvement, and having heard this compared to atrocities like Fram and Danton's Death I can report it's not on their level. It's not good, certainly - it's miscast, alternates between bonkers and a bit dull, and has no surprises, but it does have its moments. I suspect a lot of cuts have been made since previews, as the running time is half an hour shorter than advertised - and regulars at the National will know you usually have to add 10-15 minutes to their estimate, not take time off. One thing that's obviously hard to change in previews is the design, and I can see that there's some interesting thought processes behind Giles Cadle's set and the way it incorporates projections, but the finished effect looks incongruously like retro sci-fi. Or, as Jan said on seeing it, like something out of Dr No. 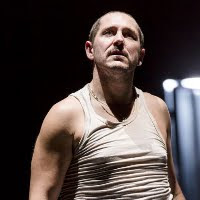 The production's main casting coup has been in getting Bertie Carvel, fresh from his Olivier-winning Miss Trunchbull in Matilda, to play the gangster Enrico. Carvel's never an actor to make the obvious choices with a role but this one's a rare misfire. I think he's aiming for a softly-spoken villain with an air of quiet menace, but it's all quiet and no menace. (He isn't helped by some of the most lacklustre fight scenes, choreographed by Kate Waters, that I've seen for a long time; I don't know about you, but seeing people lightly tapping each other on the stomach doesn't make me think I've wandered into a scene from Reservoir Dogs, and as Sheibani actively references Tarantino you'd think this would have a bit more edge to it.) Having just come away from playing an evil old lady you would have thought Carvel would have kept the evil part of it and ditched the old lady, but he seems to have gone for the other way around. I was trying to put my finger on what this rather camp gangster reminded me of, and in the second act "Frank Spencer" finally clicked into my head. 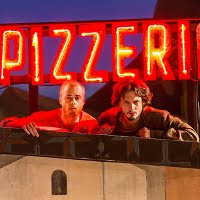 The 1635 play by Tirso de Molina, who unsurprisingly turns out to have been a monk, is essentially an extended morality play. Its duller sections often involve lengthy devotional speeches which Armesto and Carvel struggle to make believable. Actually I suspect Frank McGuinness might have got a bit bored himself while writing the adaptation, as he seems to have been playing the "see how many song lyrics you can slip in" game at times. The modern setting in this production doesn't make much sense in the context of the 17th century hermit who kicks off proceedings. And for all the modern trappings (including one of the more bizarre moments, of a holy message being delivered via a flickering neon pizzeria sign) the play's message remains a resolutely old-fashioned Catholic moral, that you can sin all your life but repent on your deathbed and be saved, but if you're good all your life and dare to question god's plan you're damned forever.

Jan wondered afterwards why on earth anyone would want to stage the play in this day and age. Actually I can understand what might have been Nicholas Hytner's reasoning in programming it, because the play so firmly endorses what I find a particularly repellent piece of dogma, and it would be interesting to see how that would work when presented from a 21st century perspective. But unfortunately Sheibani presents the play as is, and a 17th century morality play really is all that we get in the end. Generally, in fact, I found the play to be under-directed (and Lorna Brown, as the friend of Enrico's girlfriend, again under-used; some day she'll get another show like Clybourne Park to show what she's got.) 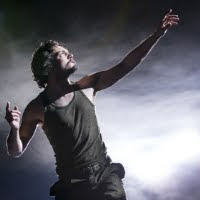 If unconvincing as the saintly hermit, Armesto is much better when Paulo turns violent villain (and he wears a vest, I'M JUST SAYING, we should take our positives where we can find them.) But if the title has given away his storyline, a scene in the first act where Enrico's crimes are revealed to be to save money for his dying father tips off what the play's ironic conclusion will be. And for all that its bonkers moments make up for some of the dull ones and questionable judgement, my biggest problem was knowing from about halfway through Act I exactly what all the upcoming beats of the story would be. The second act has some more unremarkable speechifying followed by a couple of rather good special effects (I suspect this is where the unfair comparisons to Danton's Death have come from) but SPOILER ALERT! given we see the hanged Enrico be raised up into heaven, I was hoping we'd get the full on Ghost scene of the doomed Paulo getting dragged into hell when it's his turn. Instead, post-mortem he just turns up in a doorway, rather casually letting us know where his soul's wound up, and not seeming all that fussed about it. "Here I am in hell. Typical eh! Weather a bit too hot, and not keen on the worms eating my eyeballs. But have found a couple of nice tavernas and you should see my tan! Wish you were here, love Paulo."

Ultimately I can't recommend Damned by Despair even as a car crash, because the production would need to embrace its more demented side much more to achieve that. But neither do I quite see what has made people so angry about it. It's misjudged on a number of levels and has the odd dip into dullness, but it's not a complete disaster - a two-star show, if I did that sort of thing, rather than a no-star show.

Damned by Despair by Tirso de Molina in a version by Frank McGuinness is booking in repertory until the 17th of December at the National Theatre's Olivier.