Theatre review: Dead On Her Feet 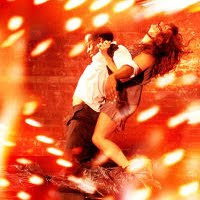 After several months closed for renovation, the Arcola's Ashwin Street base reopens. There's been some major restructuring of the bar and Studio 2 has been moved but, apart from a new entrance to the auditorium, the unloved Studio 1 remains as it was. So you still need to remember to dress warm if you don't plan on freezing while watching Dead On Her Feet, the opening production in the reopened theatre. Ron Hutchinson's play is about the Depression-era "dance marathons" in the US, endurance events where the very poorest would dance for days at a time in the hope of being the last couple standing and collecting a cash prize that may or may not actually exist. Showman Mel Carney (Jos Vantyler) arrives in a desolate town and sets up a contest, hiring a local to act as his bodyguard and general dogsbody - McDade (Ben Whybrow) is a fictionalised version of Horace McCoy, who wrote They Shoot Horses, Don't They? based on his experiences at these marathons.

There's some great performances from the three couples competing in the marathon: Wally (Sam Trueman) is a veteran of the contests, returning despite his suspicions that Carney rigged an earlier event he should have won; he teams up with Bonnie (Kelly Gibson,) who's just been kicked off a train for riding without a ticket. Black single mother Velma (Sandra Reid) and her partner Jake (Lloyd Thomas) have also only met at the start of the marathon. The only real couple are local, the overqualified, underemployed Myron (Rowan Schlosberg) and his mentally fragile wife Rita (Victoria Fischer.) All are desperate; one or more could be a plant. 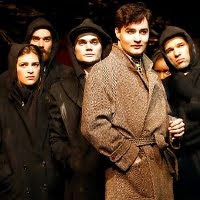 Vantyler's performance as the manic con-man Carney is perhaps a bit cartoony for my tastes, but there's no denying a downright amazing amount of energy from him, maintained throughout and particularly impressive given the low audience turnout tonight. Despite his slightly demented demeanour and obvious scheming, the fact that his constantly barked orders are all eventually obeyed just highlights the desperation of the dancers even as time goes on and they get exhausted to the point of incapacity. This passage of time felt a bit blurry to me though, despite the projected clock that occasionally appears above the dancers: The contestants go in expecting a few days' worth of dancing but the counter has already reached nearly two weeks while Carney's still talking about the event just warming up and needing some gimmicks to get the audience in.

I also found the character of McDade problematic; the fact that late in the play he gets called out on being little more than the organ-grinder's monkey and a hypocrite doesn't make him an easier character to get a handle on: His sympathies seem to change indiscriminately and often, and I didn't find that Whybrow's performance helped me understand him. 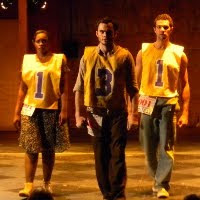 For me, Barry Kyle's production comes out as considerably better than the play itself, which is overlong and, in the first act especially, prone to syrupy melodrama. If the script was tighter and punchier this had the potential to be a really powerful piece of theatre, but as it stands it's still not without its reasons to be seen - certainly by more people than were there tonight. The women in particular are well served by roles that give them an opportunity to show off their acting abilities; the men, too, have their moments, and Trueman and Lloyd are pretty good-looking (not sure the very obvious nipple piercing poking through the latter's vest is quite authentically Dustbowl but there we are.) Kyle has created an energetic and interesting staging, marshaled by Vantyler as the second sinister master of ceremonies I've seen in as many nights; with a running joke about the ballroom's toilets not being quite ready yet that might have been funnier if the Arcola's toilets weren't, er... not quite ready yet.

Dead On Her Feet by Ron Hutchinson is booking until the 3rd of November at the Arcola Theatre's Studio 1.