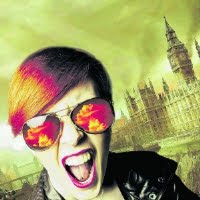 Last year touring company Blackeyed Theatre's production of The Caucasian Chalk Circle sneaked into my top ten of 2011, so when I saw that director Tom Neill's next foray into Brecht would also be coming to Greenwich, booking was a bit of a no-brainer. This time Neill tackles perhaps the best-known of Brecht's plays, Mother Courage and her Children, using Lee Hall's translation. Anna Fierling, aka Mother Courage, makes war her business: She travels the battlefields of Europe with her cart, changing allegiances as necessary, selling food, drink, clothing and anything she can make a profit out of to the various armies. She's determined that she can make a living out of war without having to pay the price herself, but over the years she has to watch as all three of her children die either directly or indirectly as a result of the conflicts.

This production nominally moves the action from the Hundred Years' War to a post-apocalyptic future, with the captions announcing the action taking place between 2024 and 2036. In practice this isn't particularly followed through, the modern dress and rock music are staples of recent productions anyway, and in any case the play's message is always crystal clear without any need to make the setting more contemporary. 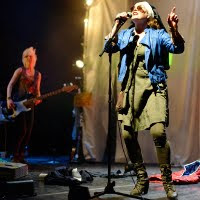 But if high concept isn't the production's strong point, what is, as with Neill's previous production, is a good understanding of how to stage Brecht's Epic Theatre on a small scale, how to make it entertaining, and how to follow the rules while knowing where to bend them a little bit. As, for example, with emotion, which some people will tell you the writer didn't want to engage, but which I think he knew perfectly well how to use to get people thinking. So Janet Grieves' Mother Courage isn't the most tough-as-old-boots interpretation I've ever seen, and I'm not sure her refusal to learn any kind of lesson from her children dropping one by one is as strongly shown as it could be, but she does pack an emotional punch - especially in the final scene cradling Kattrin - as her losses pile up, yet still she keeps following the same path as ever. 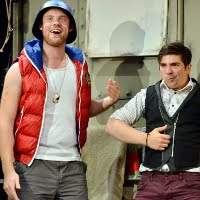 The tiny cast - only four other actors join Grieves to play all the other characters - is used well both in heightening the artificiality of the story, and for comic effect. Actors will take off a piece of clothing - a jacket or hat, don't get overexcited - and leave it on a hanger mid-scene so they can take on another character as needed, the jacket now standing in for the character they were playing before. An actor will play both sides of a conversation, the rest of the cast popping a hat on and off their head to signify which character they are at a given time. It's all very slick and a great telling of the story. JJ Henry is fun as the chaplain, and Georgina Hall is probably the best Kattrin I've seen. Courage's sons provide a bit of male eye candy - Tristan Pate handsome as Eilif, and Jacob Addley cheeky as Swiss Cheese and the Cook. Addley also gets through quite the collection of regional accents and, if he can resist his occasional tendency to mug too much, could be a comic talent to watch.

This was Richard's first Brecht play and I'm not sure he was convinced, but that's probably more his reaction to the play than the production, which he seemed impressed with. The actors also play an annoying variety of musical instruments (annoying to someone who couldn't manage to learn one) and overall this is pretty textbook stuff. It may not be as radical an interpretation as Deborah Warner's at the National a couple of years ago, but for my money it cuts to the heart of the play faster and more keenly. 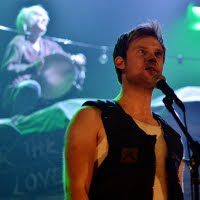