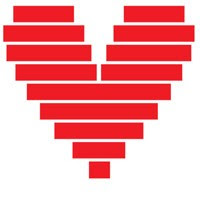 It's all looking very retro at the Garrick at the moment, as it may be playing host to a new musical, but Elliot Davis and James Bourne's Loserville is set in 1971, while there's something of the Starlight Express to Francis O'Connor's neon microchip of a set. Though a British musical, this is very much the classic American high school story, as Michael Dork (they... they know what that word actually means, right?) and his Star Trek-loving friends spend their time in the school's computer room, steering clear of the popular kids. When a similarly geeky girl, Holly, arrives at the school, Michael not only gets a romantic interest on his wavelength, but also an ally who can help with his attempt to make computers send messages to each other: He essentially wants to invent email, and get there before the big computer corporation up the road does.

The plot holds about as much water as most musicals', but the generic high school story is put to good use in a family-friendly show that's perhaps arrived in the West End a bit too early in its development, but still has a fair bit to recommend it. 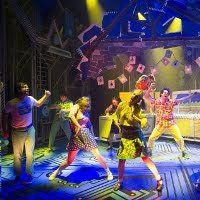 The posters plug Loserville as ideal for fans of Glee, and the songs are appropriately fun pop-rock numbers, energetically performed in Steven Dexter's production by a young cast (any "adult" roles are only heard in voiceover.) Songs like "Slacker" and "The Little Things" provide a couple of good showstoppers and the show succeeds in getting the feet tapping. The book is a bit less solid, and what makes me think the show could have done with a few more months of workshopping before transferring, but was probably rushed to the Garrick when Chicago closed. The show's attempt at comedy is by far the weakest element, and even though tonight's audience was an enthusiastic one and very much on the show's side, the one-liners drop to deafening silence. Only Francis' ("Lil'"Chris Hardman) terrible attempts at pick-up lines raise a laugh in the first act. 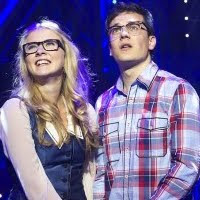 The show overall remains terribly likeable though, and has some enthusiastic performances. As Michael, Aaron Sidwell's singing voice is rather nasal (but given the songs are by Busted's songwriter, they're presumably meant to be sung that way) and occasionally cracks on the big notes, but he's an appealing leading man, well-matched by Eliza Hope Bennett's Holly. Also good is Charlotte Harwood as Leia, head of the resident mean girls, who doesn't get to break out her singing voice enough but impresses when she does. And O'Connor's set is the other star of the show - not so much the primary-coloured, brightly-lit scaffolding that forms the show's backdrop, as the endearingly lo-tech way the individual locations are represented, and which also provides the opportunity to give the show opening and closing credit sequences.

Having gone into Loserville with fairly low expectations probably helped me enjoy it all the more, and while I could never get quite as wrapped up in it as the target audience there was fun to be had in the songs. With no star names and fairly lukewarm reviews it may struggle to stay open to its current booking date, but I wouldn't mind if it proved me wrong and became a West End fixture; it's a proper family show that kept the younger audience members enthralled while providing some winks to the older ones. 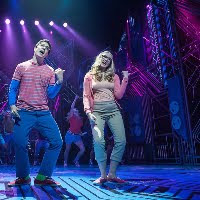 Loserville by Elliot Davis, James Bourne, Martin Lowe, Mike Raphael, Tom Fletcher, Peter Woodroffe, Charlie Grant and The Matrix is booking until the 2nd of March at the Garrick Theatre.