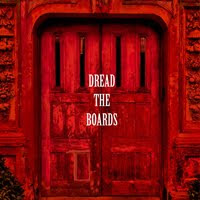 A perfectly-timed seasonal theatre trip for once as I go to a horror show on Halloween night. The faded grandeur of Wilton's Music Hall seems a perfect fit for a show about Victorian spookiness, but with the main auditorium itself still closed for much-needed restoration work, Theatre of the Damned's THE HORROR! THE HORROR! becomes instead a promenade around the rest of the building. With a bit of a nod to the constant fundraising needed to keep Wilton's standing, the show is framed as a Victorian vaudeville, the audience standing in for wealthy potential investors. Our hosts (Tom Richards and Ben Goffe) inform us that the venue is under "new management" and they hope that a suitable donation can be made tonight, a special preview of their new lineup. 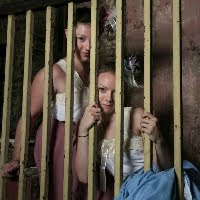 Having been disappointed by Terror 2012, the other major Halloween special I've seen this year, it's a relief to see that not everyone's forgotten how to do a spooky show. The main emphasis is still on comedy: As we go through various warren-like rooms upstairs, we see a variety of acts in different stages of completion. Some double entendre-laden songs from Alicia Bennett and Kate Quinn; the rehearsal of a new trick by an old-school magician (Tim Barton) and his hapless assistants (Fiona Rene and James Utechin) and the comic tensions between them; and some jokes and songs from a comedian (Jonathan Kemp) whose former partner has gone solo to great success. But every story comes with a nasty little sting in the tail, and as we move from room to room we hear dire warnings that staying for the trumpeted big finale might be bad for the audience's health. 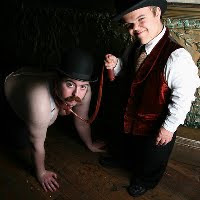 In such an atmospheric venue filled with shadowy recesses, it should be possible to create some actual chills, but despite its title THE HORROR! THE HORROR! doesn't really have anything in it to make you jump, and only the cold to make you shiver. But it does have a real love for the genre of the spooky tale, and is performed with relish. Andy found the comic monologue to be a bit overlong, but he agreed with me that Kemp gives it a strong, detailed performance. My favourite section was probably the botched magic rehearsal, with Rene's facial expressions adding a lot of laughs. And it seems ridiculous to have to praise a comedy horror show for not being afraid to use a bit of stage blood, but so many shows lately have skimped on the Kensington Gore that it's refreshing to find a company enjoying a bit of nasty fun - even before the Lovecraftian finale, Theatre of the Damned have shown a taste for the grisly. It won't keep you up at night, but THE HORROR! THE HORROR! will keep you entertained.

THE HORROR! THE HORROR! by Stewart Pringle, Tom Richards and Jeffrey Mayhew is booking until the 7th of November at Wilton's Music Hall (returns only.)

Running time: 1 hour 25 minutes straight through (plus a prologue in the bar, about ten minutes before curtain-up.)
Posted by nick730 at 22:08