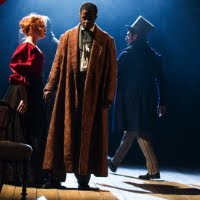 One of the biggest changes to come out of Artistic Director Musical Chairs is at the Tricycle, where Indhu Rubasingham takes over after nearly three decades of Nicolas Kent at the helm. Interestingly, considering Rubasingham was involved in the theatre's recent portmanteau political shows, she has said she's going to move away from the venue's focus on political theatre, as she doesn't want to compete with her predecessor's legacy. Instead she's looking to focus on a multicultural programme, influenced by the need to co-produce shows with other companies following the funding cuts that led to Kent's resignation. First up, Rubasingham herself directs the premiere production of Lolita Chakrabarti's Red Velvet, a project 14 years in the making, about the 19th century American Ira Aldridge, the first black actor to play the role of Othello in a London theatre.

Opening in 1867 in Poland, we meet the 60-year-old Aldridge (Adrian Lester) about to go on stage as King Lear. A much-loved and respected actor who constantly tours the world to packed houses, he remains an intensely private man and, when a local reporter manages to get into his dressing room uninvited, proves to be an incredibly angry one with a chip on his shoulder that belies the public adulation. When the reporter asks why he's hardly ever returned to the London stage she hits a particularly raw nerve and we flash back to 1833 and his two-night run as the Moor. 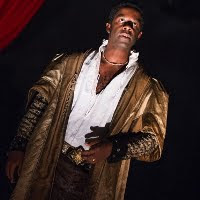 In a post-show Q&A, the cast and creatives discussed how the important thing in their opinion, wasn't to put on a play about racism but one about the things racism destroys. So Chakrabarti has kept the original offensive reviews (or at least highlights - or lowlights - of them) but most of what we see is imagined scenes backstage, and a lot of Aldridge's relationships. When the big-name actor Edmund Kean collapses during the run of Othello, the producer Pierre Laporte (Eugene O'Hare) thinks the time might be right to bring in his old friend Aldridge to replace him. The play spends much of its time backstage with the Othello cast, who greet the news of Aldridge's casting in various ways: A couple are already enthusiastic fans, others are horrified, some surprised ("When I read 'black' in the reviews I presumed it was the mood.") Most, though, are pretty quickly turned around not just by the charismatic Ira but also the comparatively naturalistic acting style he brings with him. Only Kean's son Charles (Ryan Kiggell,) angry at not having succeeded his father in the lead, remains an enemy, and proves to be a dangerous one.

14 years of work suggests a labour of love and it shows, there's a genuine fascination for the man apparent in both Chakrabarti's writing and Lester's performance (the two are married; when asked afterwards about his own research for the role, Lester suggested that 14 years living with someone obsessed with Aldridge counted as pretty thorough research in itself.) One thing I particularly enjoyed in both Rubasingham's direction and the cast's performances was the distinction in the different acting styles. The real actors are, of course, giving modern performances as the historical figures. The Othello cast we meet at the start, working in the style of the Keans, use broad acting in their performances, mined for comic effect here. And the style Ira introduces is more naturalistic, but only compared to the exaggerated version. I like that the temptation to have Ira give what would be considered a good performance today, rather than in 1833, has been resisted. (With Lester due to play Othello for real in about six months's time, I imagine it's also useful to him to be doing the extracts from the play in an exaggerated style he can easily shake off when exploring the role properly.) 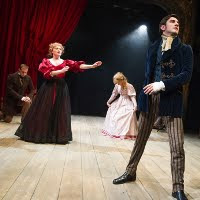 With a lead role for the playwright's husband it wouldn't be a surprise if the rest of the characters were a bit underwritten, but Chakrabarti has served the whole cast well here. Rachel Finnegan gets to pull triple duty as the Polish journalist, a bright-eyed young actress and Aldridge's wife. Ferdinand Kingsley is adorable as a puppyish young actor who idolises the American. And Charlotte Lucas is excellent as the slightly smitten Ellen Tree, excited to be able to explore sides to her Desdemona that she didn't have the opportunity to when acting opposite Kean. Even Natasha Gordon's Connie, an almost silent Jamaican servant whose presence never makes the others think twice when discussing Ira's race, gets a memorable scene that exposes the great tragedian's own tragic flaw, of being unwilling or unable to listen to anyone other than himself. 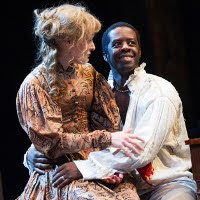 There's a lot of well-done comedy - not the biggest laugh but a rather nice moment comes when Bernard (Simon Chandler,) originally one of the most uncomfortable with Ira's race, by the time the overtly racist reviews come out has amended his reservations: It's only the idea of an American performing Shakespeare that he's unsure about. The success of Red Velvet is in making us see how prejudice not only affects the person it's aimed at, but also this circle of people around him with whom we've grown attached. The overtly theatrical theme means that even the elaborate old proscenium arch at the back of the Tricycle stage, which usually gets buried in shadows, gets to form part of Tom Piper's simple set, done up in faded, gilded glory. Powerful and thought-provoking but consistently entertaining, as far as statements of intent for a new era at the Tricycle go, this is a very encouraging sign.

Red Velvet by Lolita Chakrabarti is booking until the 24th of November at the Tricycle Theatre.