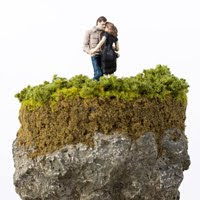 Back to Paines Plough's pop-up theatre in Shoreditch for the second of three short plays, Lungs by Duncan Macmillan. We were in the popular blue seats this time, and I was solely responsible for our seating arrangements because Vanessa, it turns out, is afraid of buttons ("What the hell is that?" she thundered at the three bowls of different-coloured buttons on the box office desk.) Like One Day When We Were Young, Lungs is a two-hander that condenses two people's relationship over a number of years into a one-act play, although here most of the focus is on one period of their lives. A young couple (Kate O'Flynn and Alistair Cope) are shopping in IKEA one day when Man suddenly brings up the question of whether they should have a baby. Woman is completely thrown by this and so begin lengthy discussions about the pros and cons of starting a family, and apart from how the pair of them will be affected, she also keeps coming back to the social responsibility of bringing a child into an already overpopulated world. 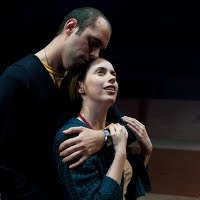 Director Richard Wilson has emphasized the play's minimalist aesthetic, with the actors delivering rapid-fire exchanges and slipping instantly from one scene to the next, and while they do move around the small stage and occasionally sit down, there's no props or miming of what they're supposed to be doing, putting the focus squarely on the dialogue. O'Flynn is very good at the constant stream of contradictory information and opinions that flood from her character at breakneck speed, although Woman is so aggressively contrary, even before her hormones can take some of the blame, that she has a hard job making us see just what Cope's flawed but warm-hearted Man sees in her. The dialogue is very snappy though, and the first half of the play is very funny as O'Flynn grapples with what kind of carbon footprint she's potentially going to give birth to, while Cope looks increasingly lost at her mood swings. Vanessa, whose experience with starting a family fortunately didn't go through quite the same stages as the fictional couple's, said that nevertheless there was a lot about the story that she could relate to. 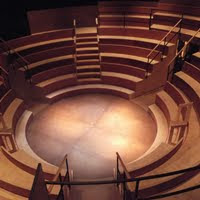 I wasn't entirely sold on the final scenes, which whizz through the couple's lives to a rather bleak conclusion that suggests Woman should have listened to her fears about the carbon footprint after all, but overall Lungs is worth seeing for some cleverly-woven dialogue and two strong performances.

Lungs by Duncan Macmillan is booking in repertory until the 27th of October at the Roundabout Auditorium, Shoreditch Town Hall.