Theatre review: Desire Under the Elms 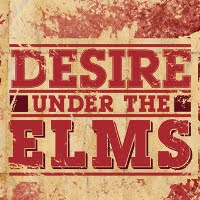 Eugene O'Neill transposes Greek tragedy (mostly Phaedra, with bits of Oedipus and Medea) to 19th century America in Desire Under the Elms, which Sean Holmes revives at the Lyric Hammersmith. Youngest son Eben (Morgan Watkins) has finally managed to get rid of his older half-brothers (Mikel Murfi and Fergus O'Donnell) as they go West to join the Gold Rush, and he hopes the family farm will now be all his when his father Ephraim dies. But when Ephraim (Finbar Lynch, thrilled I'm sure to be getting cast as a 76-year-old) disappears for a few weeks he returns with a new young bride, Abbie (Denise Gough,) and she now stands to inherit everything. But Eben and Abbie's fight over the land is complicated by their attraction to each other, and when Abbie gives birth to a son that only Ephraim believes is his, the scene is set for things to take a grisly turn.

Ian McNeil's dollhouse of a set opens up to reveal a much darker interior behind the apparently quaint little farmhouse and tiny rooms are wheeled on and off the stage, bringing some claustrophobia to the Lyric's large stage, and James Farncombe's lighting and Christopher Shutt's sound design contribute in a big way to creating an atmospheric production. 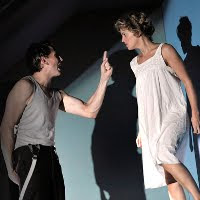 But atmosphere alone doesn't hold a show together and Holmes' production often indulges in the moodiness of the desolate setting and hard lives to the point of tedium. The performances are good, especially from Gough, but this comes across as rather a strange play (the opening half an hour featuring only Eben and his brothers, who then go off never to be seen again, is a hell of a long time to spend setting the scene and introducing the central character) given an off-kilter production: However sprightly an old man Ephraim is meant to be, having the tiny Lynch easily overpower the huge Watkins stretches credulity, and got some loud laughs tonight. As usual with O'Neill, the text is heavy on dialect (this being set in Maine there's a lot of the "ayuh"s that I remember cropping up in Stephen King books) and if not 100% convincing, the cast do a decent enough job navigating it (although the American students in the row in front of me spent the interval listing the various states Watkins' accent had visited.)

Holmes seems to like staging particularly bleak dramas around this time of year, and Desire Under the Elms is no different, although it's a barrel of laughs compared to last year's offering. There's some interesting ideas in the transposing of Greek drama memes to a puritanically Christian household, but in the end I just wasn't engaged by the play, and can see why it's among the writer's less frequently staged works.

Desire Under the Elms by Eugene O'Neill is booking until the 10th of November at the Lyric Hammersmith.