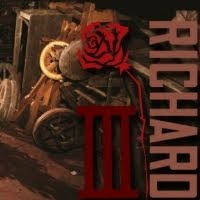 With the usual Indian summer refusing to turn up this year, I'm quite glad that tonight's rainy, freezing cold night at the Globe was my last outdoor theatre trip until next spring. I booked Richard III pretty late into its Globe run (although it too will be wintering at the Apollo) so as to leave a decent gap after the earlier Dick 3s at the Roundhouse and in Stratford. Paired with the revival of his Twelfth Night, Tim Carroll directs much of the same cast in a new production of Richard III, although this too uses the Original Practices techniques that I've expressed reservations about before. Mark Rylance plays the hunchbacked, withered-armed Richard Duke of Gloucester, brother to King Edward V and a few places down the line of succession to the throne. But the three people ahead of him are no obstacle if he kills them all, and once he becomes King Richard, his murderous insanity shows no sign of letting up. 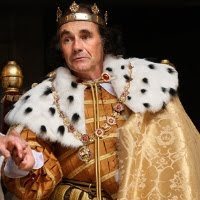 Richard is, notoriously, a monster who nevertheless has a tendency to charm the audience to his side. Rylance's rather unusual take on the character takes this rapport with the audience as its starting point and then runs wild with it. The performance, and by extension the production as a whole, actually leans towards all-out comedy. Making his first appearance hailing an unseen celebration backstage, Rylance's Richard, his disabilities in no way played down (he even has a prosthetic withered hand that becomes more prominent as the play goes on, as if the more power he gains, the less need he has to hide his deformities,) has a slightly slurred delivery of his lines throughout, as if he's a bit tipsy. He's Richard via Falstaff, or the other reference that most came to mind was David Threlfall as Frank Gallagher in Shameless (minus the accent.) His murderous campaign to reach and hold on to the throne is treated almost like a harmless scam.

In my Twelfth Night review I described Rylance as an actor whose career is typified by getting away with performances nobody else could. And for once, I'm not sure he does get away with it here. He's certainly funny and gets the audience on side, and after the interval, once he's ascended the throne, he makes a lot of interesting choices: As the king's insanity becomes harder to disguise, and Richard starts stopping dead in the middle of sentences, Rylance gives him a very creepy fixation with other people's bodily fluids, licking hands and heads, and lifting Anne's tears from her face to dab under his own dry eyes. But I couldn't help thinking this came a bit too late; the whole of his ascension to the throne was played too lightly to really imbue the whole play with a sense of menace. Ironically, the attempt to play it as a black comedy, by lightening up the blackness kind of dilutes the fierce impact of the comedy. 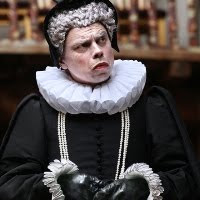 Another reason the play's air of dread is almost gone is in the edit, which completely cuts the haunting figure of Queen Margaret. It's left to Richard's mother, the Duchess of York, to provide the full fury of the older generation. Original Practices means no women on stage of course (although a couple of the terribly authentic musical instruments were being played by terribly inauthentic, real-life women, which I'm pretty sure means someone's going in the stocks.) Globe regular James Garnon plays the Duchess, as well as giving us a somewhat calculating take on Richmond, the man who will end the play as Henry VII. I remain unconvinced by Johnny Flynn's take on playing female roles: He plays Lady Anne here, and this time I found myself constantly wondering what effect doing that high-pitched voice every night for six months is having on his vocal chords (and him with a sideline as a singer, too.) And again the lack of scope for much performance was a problem for me, notably in the tricky scene of Richard wooing Anne and her unexpected capitulation, which here just ends up not making much sense. I'm not sure how much of a compliment it is to Flynn that his most powerful scene is when, unusually, Carroll has (the now Queen) Anne be onstage for Richard's announcement of her impending sickness and death, which a broken Anne silently accepts. 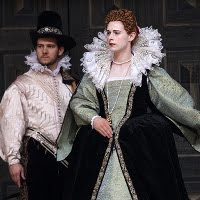 Better is Sam Barnett's Queen Elizabeth, nailing not just the emotion of the loss of her children, but also her final steely satisfaction in outplaying Richard at his own games. Roger Lloyd Pack's delivery was at times a bit too quiet, but he manages to steal a few of the laughs for himself with the strawberries in the scene that dispatches Paul Chahidi's foppish, naïve Hastings. There's a lot to enjoy about this unconventional production which (partly thanks to things like the cutting of Margaret) zips along at a much speedier pace than Shakespeare's second-longest play usually manages. But for every clever idea that lands there's a couple of odd ones that don't (the dream sees the ghosts' heads peering out of shrouds in an effect that's funny for the wrong reasons) and, as some of the audience reactions will attest to, the whole thing leans a bit too close to panto at times. Richard III is undoubtedly a play with a lot of humour among the bloodshed. But by downplaying the bloodshed, I feel as if the true shocking effect of the humour is lost as well.

Richard III by William Shakespeare is booking in repertory until the 13th of October at Shakespeare's Globe, before transferring to the Apollo Shaftesbury Avenue.