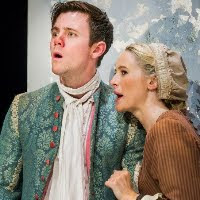 A quick note about my return visit to Susanna Centlivre's The Busy Body (the second show this year at Southwark Playhouse that I felt I couldn't let close without a second viewing - talk about a theatre punching above its weight.) I wondered in my original review two weeks ago if I might squeeze in the final performance, and the frantic comedy was something I thought might appeal to Evil Alex, who's pretty hard to match to shows (he says he's pretty open to anything, as long at it involves puppets having sex, and a song about racism; so he's been trickier to cater for ever since Avenue Q closed.) So I dragged Alex along, and when there bumped into my Twitter friend Rob, also seeing it for a second time, and also bringing someone along, another Twitter friend, Emma. So there was a decent group of us taking our place in (of course) the front row, and enough other opinions to confirm that I wasn't mistaken the first time in how uproariously funny Jessica Swale's production is. Everything I said in my original review still holds true; this being a Saturday night and the final performance in the run it was also much quicker to get the audience on side; it actually ran for about ten minutes longer than when I saw it two weeks ago, and as it didn't seem to be lagging at all - quite the opposite - I can only assume it was because the action needed to stop for laughs more frequently. Mentioning the memorable performances would basically involve copying out the cast list - and while it's not unusual for talented actors to end up in thankless roles, Swale's attention to detail extends to everyone, so Kate Marlais, Ruth Clarke-Irons, Henry Shields and Jeremy Lloyd, as various servants plus performing the musical numbers, all get many scene-stealing opportunities - there really aren't any thankless parts by the time we're done with the play. Matthew Spencer as the unceasingly teased Sir George really is excellent as he gormlessly reacts to yet another affront by the rest of the cast, and it's always worth mentioning Ella Smith, who brings that extra layer of sauce to proceedings. When recording a podcast review of this show the other week it was mentioned to me that Gay Soper's Lady Jealous Traffic was actually written as Lord Jealous Traffic; the gender change is seamless, although knowing about it does make a bit more sense of the scenes where Marplot threatens an older lady with an imaginary army. 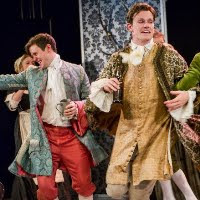 As the titular Marplot, Cerith Flinn (looking very overdressed compared to certain other plays/Lynx adverts I've seen him in) was a bit lacking in impact in the matinee I saw originally; on the other hand Rob said that when he saw the show he erred too much on the other side of overacting (which, in a production like this, is always a bit likely.) He seems to have struck a happy medium as he's got used to the role though and was very good, in the unsubtle way of such parts, tonight (Alex was on the receiving end of Flinn practically sitting on him; while, among other flirtations over the course of the show, Emma got proposed to by Gus Brown's Sir Francis Gripe in the finale. She turned out not to be a wealthy heiress though, so not really his type.) This year I was fortunate enough to get to see Swale's Restoration comedy in time to recommend it, and I know some people have seen it as a result. If you weren't among them all I can suggest is what I've said in the past, to keep an eye on Southwark Playhouse and Swale's Red Handed Company, for the next "Lost Female Wits" rediscovery.
Posted by nick730 at 23:34