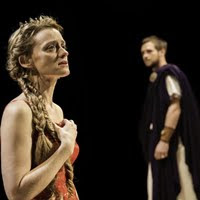 For the fifth production in Josie Rourke's... unusual first year in charge of the Donmar, designer Lucy Osborne has partly reconfigured the auditorium, moving one of the stalls seating blocks. Combined with the curved wooden staircase that forms the set's centrepiece, it creates a kind of spiral in-the-round staging, and as the whole stage is covered with sand, it feels as if this production of Racine's Berenice is being performed inside a sea shell. Rourke directs, and the novelist Alan Hollinghurst makes a rare foray into theatre to write the translation of one of Racine's Roman tragedies. Titus, who has just become Emperor of Rome, is in love with Berenice and plans to marry her. But Berenice is a foreign queen, and despite having lived through Caligula and Nero, the idea of the Emperor marrying an outsider, let alone a member of a hereditary royalty, remains one of the most appalling things he can do in the eyes of the Roman people.

Anne-Marie Duff is majestic as Berenice, a woman about to be ditched by a lover who's been advised by Paulinus (Nigel Cooke) to listen to the people's wishes over his own heart. But there's a lot that's problematic with Rourke's production, beginning with Hollinghurst's version of the text. It feels very old-fashioned and cumbersome, and there's little in it that grabs the attention - for one audience member in the stalls, moving the seating up against the back wall provided a handy place to rest his head as he slept. 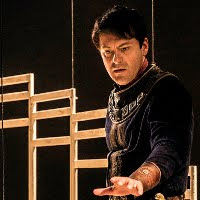 Stephen Campbell Moore's1 Titus is lumbered with most of these long speeches, and although he has his moments of emotional connection, for the most part he, like most of the cast, has opted for a declamatory style that does little to liven things up. Titus has given the task of escorting Berenice away from Rome to another foreign royal, Antiochus (Dominic Rowan,) not realising that Antiochus himself loves the queen and has already had his advances spurned. Rowan is usually a very reliable actor but he's rather phoning it in here - it's not too surprising that Berenice gives short shrift to his declarations of love, as they hardly seem heartfelt. And this is true not just of Rowan but the production as a whole: For a story apparently about overwhelming passions, the whole thing feels incredibly cold-blooded. Kurt Egyiawan's Arsace is a welcome injection of enthusiasm, and I think a big audience laugh at one of his interjections about halfway through was down to relief as much as anything else. 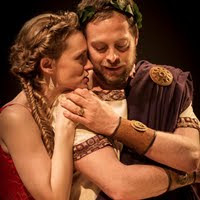 It seems Berenice is not generally regarded among Racine's best work, but I'm always keen to see a production that appears to contradict that kind of received wisdom. This, unfortunately, isn't such a production, and my first experience of the play is of it being by far the least emotionally or intellectually absorbing of the French writer's works I've seen so far. Osborne's suspended staircase, which Duff in her red dress and intricately coiffed hair is regularly required to run up and down, at least provides a centrepiece which can bring some colour and movement to a fairly static production. But even as someone with an interest in creative set design ideas (all three regular readers will probably have noticed I'm much more likely to mention the set in a review than, say, the costumes, sound or lighting design) I think there's something wrong if the set, which we see as soon as we take our place in the theatre, is still the main thing to capture the interest by the end.

Berenice by Jean Racine in a version by Alan Hollinghurst is booking until the 24th of November at the Donmar Warehouse.

1Campbell Moore's programme bio doesn't mention his appearance in the Olympic opening ceremony. Funny, I'd have thought that was something people would want to show off about.
Posted by nick730 at 21:57