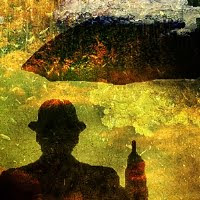 The Finborough used to be a pub theatre, then it was a pub theatre without a pub attached, then a wine bar theatre. Now it's a wine bar theatre without a wine bar attached, as yet another business on the ground floor unfortunately goes under. Upstairs though the theatre continues, touch wood, to thrive with another full house, for another of its "lost" classics - although in this case, apparently Hugh Leonard's memory play A Life is fairly regularly revived in its native Ireland, if not here. Desmond Drumm (Hugh Ross) is a couple of months away from retirement, but he won't get to enjoy it: He's told his wife that he's been diagnosed with an ulcer, but in reality he's been given less than six months to live. When he visits his estranged friend Mary to make up, it sets off memories of his youth, and we see him in his twenties (David Walshe,) the mistakes he made then - and the ones he continues to make even now with time running out.

The play shows two couples decades apart, and partly deals with Drumm's regrets over the woman he loved and lost (Kate Binchy as the older Mary, Mary Mallen as the younger.) We see how he initally dismissed the doting Dolly (Judith Coke as the older, Jenny Fennessy the younger) and how, even now that she's his wife and they have children and grandchildren, he still treats her with less affection than he does Mary. 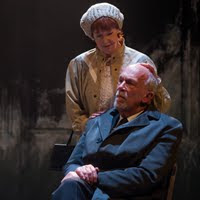 But what A Life is ultimately about is a reckoning that's never quite going to be made, as Desmond is a very unsympathetic character. Both actors get laughs from his erudite, prissy put-downs, but the intelligent and well-educated Drumm sees himself as vastly superior to everyone else in his small town, and never hesitates to let them know it. Even in his younger days in what pass for attempts to woo Mary, he can't resist constantly correcting her grammar. A lifelong civil servant, he approaches the end of his life by attempting to tally up his worth in credits and debits, what he owes and what he's owed, without ever learning how to treat another person with respect. His love rival, eventually victorious in marrying Mary (Neil McCaul as the older Lar, handsome Robert Lonsdale as the younger) is an idiot, a drunk and chronically unemployed; but he's also endlessly forgiving and kind-hearted. 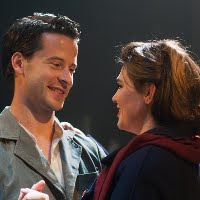 This kind of melancholy memory play that seems a particularly Irish genre is one I often find to be quite maudlin and dull. A Life is perhaps 15 minutes too long, and its denouement goes for one of the most overused plot devices there is (although Leonard gives it a bit of a twist) but otherwise it acquits itself well in Eleanor Rhode's understated, measured production. James Turner's set is almost bare, a plain wooden chair (which takes on a symbolic significance later in the play) the only piece of furniture. With the Finborough in its thrust configuration, the lack of other places to sit sees the cast often sit on the steps among the audience, sometimes quietly watching their older or younger selves and blurring the line between actors and audience much as the play blurs the line between past and present.

With its underplayed style and hard-to-love lead (for all his education, Drumm's tragedy is an inability to learn from his mistakes in dealing with others) A Life isn't going to be for everyone (it certainly didn't seem to be for the people next to me, who left at the interval) but it's a good example of this low-key genre, which an excellently-acted production makes a strong argument for.

A Life by Hugh Leonard is booking until the 27th of October at the Finborough Theatre.