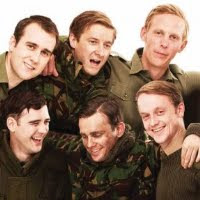 Director David Grindley scored a hit with his revival of Journey's End, which most recently popped up in the West End last year. His latest production sticks with the army theme but moves on both in time - to the mid '80s - and to a point after the front line, looking at the damage done to soldiers and what kind of life they can expect afterwards. Jonathan Lewis' Our Boys is set in a grim military hospital in Woolwich, where a trainee officer has been sent for a routine operation. Because of a shortage of private rooms, Potential Officer Menzies (Jolyon Coy) ends up in a ward with three regular squaddies, who resent having a "Rupert" in their midst. Ian (Lewis Reeves) has had severe head injuries in a bomb blast, and is in the middle of lengthy rehabilitation to get him walking and talking normally again. Northern Irish Meatloaf fan Keith (Cian Barry) is increasingly losing all feeling in his right leg for reasons, whether physical or psychological, that the doctors can't figure out. And Joe (Laurence Fox,) who seems the most mobile of the lot, is there for reasons that aren't revealed until later in the play.

Much of the attention on this production has been, unsurprisingly, centred on two men from a neighbouring ward who occasionally roll in in their wheelchairs to catch up with their friends, as they're played by actors from two major fantasy franchises: Parry is played by Arthur Darvill in his first post-Doctor Who role, and I get to tick another Harry Potter actor off my list as Matthew Lewis plays the dim-witted Mick. (Actually I think we were quite lucky that Lewis was even on tonight - before the show he mentioned a shoulder injury on Twitter, and at the curtain call he looked to be in some discomfort with it.) 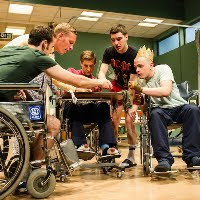 With their depressing surroundings and painful circumstances, the characters are determined to cheer themselves up and so despite some heavy themes Our Boys is often a very funny play, the group's laddish sense of humour the prevailing tone. The first act isn't that heavy on story, concerning itself more with setting the scene and introducing the characters and their tensions. The introduction of an officer, if only a potential one, to the mix, inevitably brings an element of class war into the ward, and the fact that class still affects people's prospects in the military is pretty insane. Menzies gets off on the wrong foot with Keith, and there's also tensions with Parry, who blames an inexperienced officer's bad decision for him losing most of his toes to frostbite. But as the second act gets going, some of these concerns start to seem like red herrings, and Lewis' real focus is on these soldiers' futures once they leave the hospital. 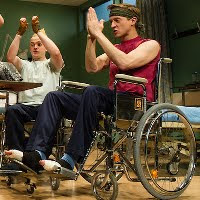 The play's second half concerns itself with the fallout from a birthday party the group holds for Ian. When it's discovered (offstage - the only characters we see are the soldiers, and other than the stagehands being dressed as orderlies for the scene transitions, there's no sign of medical staff or the men's superiors) that they smuggled beer into the party, all six are under investigation, and the whim of an officer could end their military careers. As they try to get their stories straight, the true heart of the play turns out to be their fears for what'll happen to them if they can't get well enough to stay in the army. Parry in particular is haunted by the image of a homeless old man who turned out to be a much-decorated World War II veteran, and for many of them it seems that the army was the only job available to them - another area where Menzies will turn out to have more in common with the rest of the men than expected. In this context the title Our Boys takes an ironic edge, the common tabloid term for soldiers being used in connection with a story about how people can forget them when they've done their job.

I could gripe a bit about some of the medical stuff: Not all the men are there as a result of injuries in action; Menzies is there for treatment to a pilonidal sinus, an operation I've had myself. So while I can confirm that it's not the most dignified of ailments, I suspect that some of the symptoms have been exaggerated for comic effect, particularly as it means heaping indignities on the man they're supposed to unquestioningly respect. 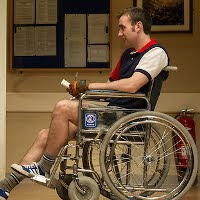 Meanwhile Mick is in there to be circumcised, so although there's no actual nudity in the show (Barry does get his arse out, and Fox strips to his pants a couple of times,) if the prospect of Matt Lewis spending the majority of a scene discussing his cock with Arthur Darvill and Jolyon Coy hits your buttons, this may well be the play for you. Actually Fox's aforementioned scenes in just his underwear did contribute to another of my little gripes about the medical details, as we find certain things out later on that suggest he should have been quite severely disfigured, which he clearly was not. So I can't say that Our Boys isn't without its distractions (not all of them on the stage - that's the trouble with celebrity casting, it can lead to audience members who are a bit... excitable) but for the most part it's well worth seeing and Grindley's production does a very good job of balancing the jovial tone of much of the action with the lurches into a more serious side. 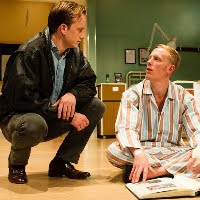 Theatre seems to be revisiting the 1980s a lot lately and I can see why: Unfortunately, the huge amounts of homeless people that the play references, and that I remember lining the streets of London when I was younger, have started to become a common sight again ever since the current government came in. The arts were the first to feel the Coalition's wrath, and it's interesting to me that instead of a kneejerk angry reaction, for the most part they've come back with a sometimes chilling reminder of what happened last time, and that it may have started with the arts but, as is increasingly coming true, everyone else is next. (Or to put it another way: The Eighties - A Warning From History.)

Our Boys by Jonathan Lewis is booking until the 15th of December at the Duchess Theatre.