Theatre review: All That Fall 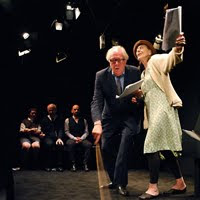 Sometimes it becomes apparent that a particular writer's lauded genius is something you're just going to have to take on trust, and you're never going to get on with their work. So it is with me and Samuel Beckett whose work, after many attempts, I decided I was just never going to "get," and would stop booking revivals of his plays unless a very good reason presented itself. (I've sometimes wondered if the Beckett estate's famous stranglehold on how his work is performed is part of the problem; that maybe some director might have a radical vision that would make one of his plays come to life for me, but he or she would never be allowed to stage it.) But as far as reasons to make an exception go, the one that's made All That Fall such a hot ticket is a pretty good one: The chance to see Eileen Atkins and Michael Gambon acting together, and in a very intimate space. 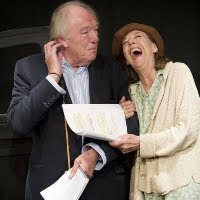 Originally commissioned in 1956 as a BBC radio drama, and intended to stay that way, the estate has refused stagings of All That Fall until recently, and Trevor Nunn's production pays much homage to its roots: A "semi-staged reading," old-fashioned microphones hang from the ceiling (albeit for cosmetic purposes only) and the cast sit at the sides of the stage, rising only when it's their turn to perform, script in hand. Recorded sound effects form a major part of the story's landscape, evoking the sounds of a rural part of Ireland, and the most important sound of all: The slow, painful shuffling along of an elderly woman. This is Mrs Rooney (Atkins) who is making her way to the train station to meet her blind husband (Gambon.) Along the way she meets a few of the villagers (Ruari Conaghan, Frank Grimes, Gerard Horan,) and on arriving at the station she frets to the people there (Ian Conningham, James Hayes, Catherine Cusack) that the slight delay in the train's arrival signifies some terrible tragedy. 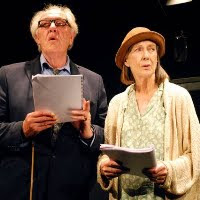 I went to All That Fall for the performances and those remain the reason to see it; it's got me no closer to appreciating Beckett's bleak, death-obsessed poetry, although there are moments where I enjoyed the writing and a few hints of humour. And Mrs Rooney's wild mood swings from vulnerability and optimism, via reminiscences of terrible mourning, to aggression and rudeness towards the other villagers, hint at an interesting look into people on the depressive spectrum. Gambon is predictably good as he thunders the old man's frustrations; but as his character doesn't appear until more than halfway through the play this is really the wonderful Atkins' to carry, and her short walk across the small Jermyn Street stage on her own, and back again steering her husband, becomes an odyssey. Beautifully performed, but I'm as far from finding real meaning in it - or feeling much - as I ever am.

All That Fall by Samuel Beckett is booking until the 3rd of November at Jermyn Street Theatre (returns only) then from the 6th to the 24th of November at the Arts Theatre.