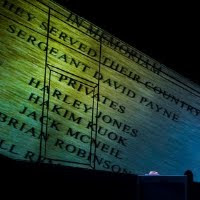 Advertising itself as London's first new purpose-built theatre complex in 30 years, the St James Theatre's first task will be convincing anyone that London actually wants it. On a corner a few minutes' walk from Victoria, a shiny foyer with a bar/brasserie looks more like the lobby of a chain hotel than a creative space. Hopefully time will bring a bit more character to its public face. Meanwhile the opening season of programming seems surprisingly low-key, and they shouldn't be surprised to have attracted comments that they're presenting regional theatre at London prices (on the surface there doesn't seem a huge difference in the programming here and that at my local theatre, a receiving house that struggles to put bums on seats at a fraction of the ticket price.) The auditorium itself is a nice medium size (312 capacity) with stadium seating meaning decent sightlines to the small thrust stage - though I would have hoped for better soundproofing in a newly-built theatre. But of course what it's all going to come down to is the quality of the work actually put on that stage, and for its inaugural production the St James has turned to Northampton's Royal and Derngate Theatres, and a play by writer, performer, and Chief Lesbian to the Court of Radio Four, Sandi Toksvig.

Bully Boy follows the growing friendship between two army men of different generations, wounded in different wars. Wheelchair-bound from his time in the Falklands, Major Oscar Hadley (Anthony Andrews) now conducts investigations into cases of gross misconduct on the front. Private Eddie Clark (Joshua Miles) is in a regiment nicknamed the Bully Boys, and a member of a unit accused of murdering a local child on tour in Iraq or Afghanistan (Eddie admits his own father can't remember which it is he's been sent to.) The two-hander looks like it'll follow Oscar's investigation into the events, but when a bomb blast kills the rest of the unit, leaving Eddie the only one with knowledge of what really happened, the two men are sent back to the UK where Eddie's behaviour becomes ever more unpredictable. 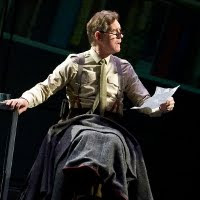 Though much has been written about the current campaigns in the Middle East there's always room for another point of view and a reminder that just because they've been overtaken in the news doesn't mean these events are over. Indeed, you could say Bully Boy argues that the Falklands aren't entirely over either, with the revelation that the number of veterans of that conflict who've since committed suicide has now overtaken its casualties in combat. Over the course of its 100 minutes the play touches on a number of areas that the subject matter brings up, like the political motivations behind both conflicts and the similarities therein, the impossibility of someone who's been through horrific events to readjust to daily life, and what the right way is - if there is one - of remembering those who've died in such circumstances. But a show is always stronger when it picks its battles and Toksvig's main concern is with that issue of mental health. 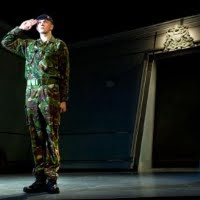 In fact David Gilmore and Patrick Sandford's production makes particularly good use of contrasting the two men's injuries, Andrews mostly confined to his chair while Miles bounds about in angry, nervous energy. In a moment I found of interest, and which I'm sure would get the thumbs-up from the recent campaigns for awareness of mental health issues, Oscar questions the difference in public reaction to his own visible disabilities, and Eddie's invisible ones. Both actors give excellent performances although the younger has the edge with his moving, broken young man - Andrews tends to compensate for the restriction on his physical movements by BARKING his lines a bit too often. The relationship they build up together is the real heart of the show, although I did feel they got relaxed around each other too quickly - even with Oscar's obvious sympathy for those servicemen mentally scarred by war, it seems unlikely he'd let Eddie get away with disrespecting his seniority from so early on in their relationship. The actors got a standing ovation from tonight's audience so the show obviously hit a few nerves, and it's certainly worth catching. I still think something as low-key as this is a bit of a perverse way to try and draw attention to a brand new venue, but in terms of quality at least it provides an encouraging start.

Bully Boy by Sandi Toksvig is booking until the 27th of October at the St James Theatre.