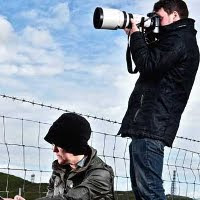 Having put her once-abusive mother in an old people's home, investigative journalist Jane (Sarah Malin) returns to her old house to clear it out. While there she meets up again with a childhood friend, plane-spotter Ray (Jacob Krichefski) and asks him for help identifying a small airplane: She believes it was used by the CIA to abduct a British citizen and take him to be "questioned" as a suspected terrorist. Jane thinks she's uncovered an American plot to send terror suspects to be tortured in various countries with oppressive regimes and diplomatic ties to the US. Clare Bayley's play Blue Sky is set around the time of the protests against the Iraq war (so the action probably starts in late 2002, continuing into 2003) although it takes a while for it to become apparent that it isn't set in the present day. 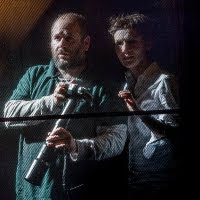 I must say I struggled to find anything much to connect with in Blue Sky. Elizabeth Freestone's production feels sluggish and under-rehearsed, with a couple of the cast still stumbling over their lines occasionally, and Malin's a rather wooden central performance. The brusque character of Jane would be easier to get behind if I could believe that her cold manner was compensated for by her being the brilliant investigative reporter we're told she is, but in order to stop the entire plot unfolding in the first ten minutes, the amount of things that "never occurred to her" in the course of her investigation would fill volumes. (And however old-school a journalist she may be compared to Ray's blogging daughter Ana, even ten years ago would she have been quite so surprised at the amount of research that can be done online?) 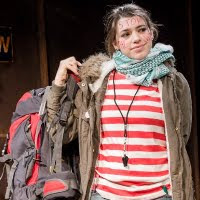 The strongest moments in the play come from the brief periods when Jane interviews Mina (Manjeet Mann,) the wife of the man who disappeared, and who believes the whole thing is a smokescreen for her husband having an affair and leaving her. But the subplots about the differences between Jane and Ana's (Dominique Bull) approaches to finding and exposing a story, and especially the underdeveloped revelations about Jane's childhood, ultimately don't feel that well-integrated into the main storyline. As for that central story itself, it feels rather dated - the abuses of power made in the name of the war on terror have been tackled by many plays before, and I guess I'm looking for a whole new angle if the topic's going to be dealt with again so soon, an angle that isn't on offer here. Upstairs in the same building, contemporary relevance is being found in events from centuries ago, unfortunately I didn't find as much of it in events from the last decade. 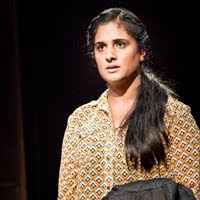 Blue Sky by Clare Bayley is booking until the 10th of November at Hampstead Theatre Downstairs.1

1this used to be known as The Michael Frayn Space, but it seems to have been quietly rebranded in recent months as Hampstead Downstairs, which was previously just the name of the season of new plays staged there.
Posted by nick730 at 22:21