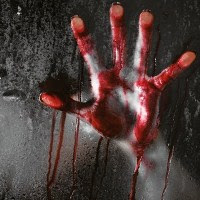 There's plenty of shivers during Halloween show Terror 2012, but only because the air conditioning's been put on full in an underground room in October. This is the third year I've been to the annual mix of spooky theatre and cabaret, and the shows tend to be best described as a mixed bag: Usually there's more laughs than frights, with at least one downright terrible piece, a couple of fun ones, a couple of jumps in the dark and one piece of psychological horror that manages to send the odd chill down the spine. This year unfortunately doesn't even aspire to being hit and miss. I couldn't even call it "miss and miss," as that would suggest some attempt at least is being made at fulfilling the poster's promises, even if it doesn't succeed. But this is one of the laziest pieces of work I've seen in some time.

Returning for a second year to the Downstairs space at Soho Theatre, with table seating and a bar, the cabaret element has been allowed to take over completely (minus the variety the term implies.) Instead of the occasional sexy/funny/burlesque interlude between creepy playlets, the show is now dominated by Desmond O'Connor and Sarah-Louise Young with their insipid, samey songs, and a central conceit based around a hackneyed magic trick. When the show opens with the most half-hearted, obvious bit of planting in the audience imaginable and you're already thinking of better payoffs to the gag than what they've come up with, things don't bode well. Quite a large chunk of the show's attempted scares are based around the common phobia of spiders. People who've met me may recall I usually wear a ring with a spider design, so safe to say I'm not arachnophobic, and the main thrust of the "terror" was lost on me. Then again Jan says he is afraid of spiders, and he was similarly unfazed.

The theatre sections are essentially sketches, first Robert Farquhar's No Place Like, whose payoff isn't the strongest but might have worked if the timing hadn't been spectacularly off (timing is as important to horror as it is to comedy, no wonder both fall flat here.) Mike McShane's Representation (directed by Hannah Eidinow; all the other sketches are directed by Matt Peover) is essentially setup to a punchline. On paper, Mark Ravenhill's The Experiment should be this year's, if not spine-chiller, at least somewhat unsettling piece - too bad William Donaldson performs it so flatly. And then in case we hadn't had enough of Young and O'Connor they actually appear in the final piece, Alex Jones' predictable S&M parody Fifty Shades of Black.

The budget hasn't stretched to more than a couple of drops of Kensington Gore, the grisly bits done half-heartedly and telegraphed a mile off. There's been rumours of problems with the originally scheduled lineup and last minute replacements (Ravenhill's piece was originally performed in the 2009 lineup) and it shows. Besides, I'm sure last year's lineup had similar late changes, they seem to be a regular feature, it's just the whole thing's not felt as hastily cobbled together as this before. These specials have been running for a few years now, maybe production company The Sticking Place should invest in a diary so they get enough warning for when Halloween's due to come around. The Terror franchise has managed to attract some good names in the past - Ravenhill seems to be a fairly regular contributor, and Neil LaBute and Jack Thorne have contributed to the last couple of shows - but this year's offering could well put any decent creatives off working on it in the future. Another dud for the under-performing Soho Theatre.

Terror 2012 - All In The Mind by Robert Farquhar, Mike McShane, Mark Ravenhill, Alex Jones, Desmond O'Connor and Sarah-Louise Young is booking until the 3rd of November at Soho Theatre Downstairs.