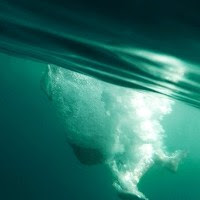 Like a lot of businesses, theatres have tried to capitalise on the Olympics this year; although who would have thought the Olympic theme the Royal Court would choose to emulate would be a ticketing system that confused and angered people, leaving some unable to get hold of tickets at all, and others with more than they actually wanted? It'd be nice to approach The River with a completely open mind, but this really would be ignoring the elephant in the room, as the decision to stage the new play from the creative team behind the juggernaut hit Jerusalem in their smallest venue, for the standard month-long run, with a starry cast and no advance tickets available, has been one of the theatrical stories of the year, widely seen as a cynical marketing ploy to drum up demand for a money-spinning West End transfer. I wasn't willing to skip booking other shows I wanted to see on the off-chance of catching this one, so had left only one day next week free to try my luck. As it happens I didn't need to, as two of my friends were trying to book simultaneously in hopes of doubling their chances and getting two tickets between them; they ended up with two each, and a quick Twitter message later I had a ticket a lot sooner than expected, and without the stress.

Well I'll say right from the start that I thought The River was a very good play; but is it good enough to justify not just the faff, but the animosity the Royal Court has courted with its perverse marketing?

Writer Jez Butterworth, director Ian Rickson and designer Ultz reunite for a play with some of the lyrical language of Jerusalem, but an altogether more delicate piece overall. A piece of land in the woods, including a stretch of river good for trout fishing, has belonged to the same family for a couple of generations. The current owner is a man (Dominic West) whom we first see bringing his new girlfriend (Miranda Raison) to his cabin in the woods for a romantic weekend on a moonless night in late summer. He's going to share his love of fly fishing and the story of his childhood visits to the cabin. Later in the play, we'll see what happens when a different woman (Laura Donnelly) comes to the same romantic spot. And that's all I can say as this is one of those plays where finding out what's going on, and what it's really about, is part of the audience's journey through the story.

Even the relative naturalism of the play is up for debate, at times we're led to believe there may be an almost mystical force at work (did the man somehow arrange the thing that happened with the birds?) at others an almost banal, very human force of romantic lies and deceptions is making things happen in a specific way (even the way things end, both times, seems to be part of the plan. And yes I'm trying to be vague enough not to spoiler but specific enough to make sense to people who've seen it, no idea if it's working on either count.) The River makes us question the "special" moments in our lives.

I've never been convinced that Dominic West is as good as the hype surrounding him suggests but this was by far my favourite of his performances, a very tricky character to put across. Raison is as good as ever in a sexy, flirty role with hidden depths of its own, and Donnelly provides just the right amount of contrast with her. And the play itself, in Rickson's nuanced production, keeps you guessing. If you do get tickets in the morning, make sure you then get plenty to eat during the day: A baked trout (courtesy of an amazing insta-cooking wood-burning oven - I could see Ian leaning forward excitedly hoping to catch a stage-hand doing the swap between the uncooked fish and the cooked one) provides the most enticing food smell in a theatre since Meera Syal's chips, you wouldn't want to be smelling that on an empty stomach.

But is The River worth the hoops the Royal Court asks people to jump through to see it? In the end Rob, who got our tickets, got them on his first try so it wasn't a bother for him, and even less so for me as it pretty much fell into my lap unexpectedly, so I was able to enjoy the show - with some provisos - on its own terms. But what if you've cleared your diary for a couple of weeks, then had several failed attempts refreshing the website before finally getting your tickets? Or got up in the middle of the night to queue in Sloane Square in October/November for the 30 tickets sold in person every day? It might struggle, through no fault of the cast or creatives, to live up to the effort the theatre tell the audience it's worth making. Even with a hassle-free ticket, those provisos I mentioned are the fact that I was constantly looking out for whether the excuses the Royal Court made for sticking it in the smaller-capacity theatre and so creating this demand, were justified. I think the verdict for all of us was a resounding no: The story went that The River was too intimate and delicate a piece for the larger Downstairs theatre. Well Ultz's set is a naturalistic log cabin, staged end-on and looking like it could fit just as well on a big proscenium stage as in the little studio. And Jez Butterworth is hardly a novice playwright whose work you need to be sitting right on top of if it's not to lose all its power; the dialogue is lyrical but robust, and the suggestion that someone genuinely thought this would falter Downstairs while the much more intimate Constellations is about to transfer to the Duke of York's1 is faintly ludicrous. The River isn't too delicate to be watched by 380 people at a time Downstairs. If there's anything it's too delicate for, it's living up to the billing as a play worth rearranging your life around.

The River by Jez Butterworth is booking until the 17th of November at the Royal Court's Jerwood Theatre Upstairs. (Tickets only released online at 9am on the day of performance; a further 30 tickets released in person at the box office at 10am.)

1one of the circles is being closed as a concession to the difference in scale, but it's still a huge difference in venues and I'm interested to see how well that works
Posted by nick730 at 23:57