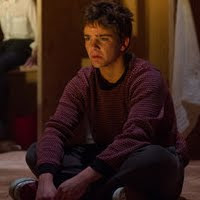 The James Menzies-Kitchin Award returns for a second year to its current home in the Young Vic's Clare auditorium, where this year's winner Sam Pritchard has chosen to revive Marius von Mayenburg's Fireface, in a translation by Maja Zade. A twisted look at the frustrations and raging hormones of adolescence, von Mayenburg's play takes us into the home of a disfunctional family, whose laissez-faire parents are unwilling or unable to see how far their children's angst differs from the norm. Olga (Aimeé-Ffion Edwards) is impatient to leave her childhood behind, and when her younger brother, pyromaniac Kurt (Rupert Simonian,) starts to have his own sexual awakening, she decides to take a more hands-on approach to educating him in such matters than is usual for a sister. When an outsider breaks into the siblings' private world, Kurt's love of fire and explosions reaches a new level.

Productions in the Young Vic's smallest performance space tend to embrace rather than disguise the room's rough-and-ready appearance, and Amanda Stoodley's design is no exception, the family's home a raised MDF box whose many shelves at the back hold all the props and costumes that'll be needed over the course of the 90 minutes, as well as providing the occasional place for one or other of the siblings to crouch and hide away from the world. Though they're not without their somewhat creepy eccentricities - Mother (Helen Schlesinger) is prone to menstruating over the bathroom floor and not cleaning it up, or washing her ladygarden in front of her son; Father (David Annen) is fixated with news stories of murdered prostitutes - it's more the parents' unwillingness to face their children's situation that seems to be behind how badly damaged they are: Even after Kurt has burnt his face in an attempted arson and been expelled from school, they talk almost jokingly about his going through adolescence, and even joke that his problems have brought the two of them closer together. 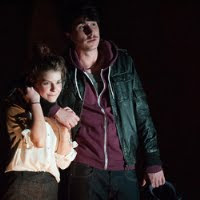 Edwards and Simonian have both been young faces to watch for a while now, and paired as the siblings they make a dangerous combination. The third wheel in their relationship is Olga's first boyfriend, the motorbike-riding Paul (William Postlethwaite,) whose bad relationship with his own father sees him getting closer to the family even after his relationship with Olga ends. Paul gets so comfortable in the home that Postlethwaite has a
FULL-FRONTAL MALE NUDITY ALERT!
and suffice it to say that his application to the Honourable Society for the Preservation of MASSIVE BALLS (Life Chairman: Mr D. Radcliffe) will probably go through without any objections. Incidentally this particular scene features one of the occasional little witty touches Pritchard has sprinkled around the production, as Paul is meant to be taking a shower, so Simonian squirts Postlethwaite with water out of a bottle. 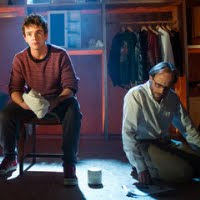 Pritchard has been very good at bringing to the stage the play's odd expressionistic tone, and in getting strong performances from his actors (although Postlethwaite does have the occasional somewhat wooden moment1.) Where I thought the director was less successful was in pacing the play, which for me didn't have enough of a sense of the situation escalating, so the tension that should have led up to the shocking conclusion wasn't really there, and the middle of the play feels rather samey. But he has managed to stamp a certain amount of his own identity onto the production, which in a showcase for directors is always something that you're looking out for; Fireface isn't entirely satisfying on all levels but it works on enough that I'd be interested to see what else Pritchard has to offer in the future.

Fireface by Marius von Mayenberg in a translation by Maja Zade is booking until the 20th of October at the Young Vic's Clare.