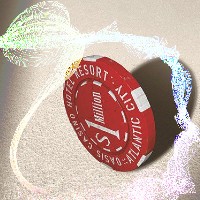 Of all the musicals to be based on an unlikely source, Michael Conley (book and lyrics) and Dylan Schlosberg's (music) Indecent Proposal is definitely the latest. Best known for the Robert Redford / Demi Moore / Woody Harrelson film, it's probably fair to say this doesn't quite fit into the category of recent shows cashing in on beloved movies - it's unlikely the first thing that attracted the creatives was that sweet, sweet 35% Rotten Tomatoes score. Instead they went back to the original source, Jack Engelhard's late-Eighties novel, and have stuck with both the time period and the grubby Atlantic City casino setting. Jonny (Norman Bowman) works as a musician in various dingy casino rooms, while his wife Rebecca (Lizzy Connolly) also juggles multiple jobs. It's still barely enough to keep them in hot dogs, let alone pay college tuition for Jonny's daughter from his first marriage.
When multi-millionaire Larry (Ako Mitchell) arrives at the casino and befriends the couple, he makes Lizzy an Indecent ProposalTM: A million dollars if she'll spend one night with him. She refuses, but when she angrily tells her husband about the offer later, Jonny finds it hard to dismiss entirely. 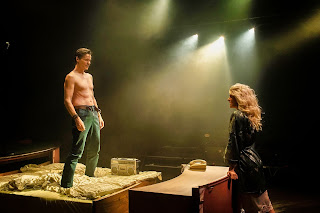 I like the idea that Larry has, largely for his own amusement, thrown a grenade that will destroy their marriage one way or the other: If she prostitutes herself it'll hang over them forever, but if she says no they'll spend their lives barely scraping by and wondering what might have been; either way they're likely to resent each other for the rest of their lives. That's the premise, but it's also pretty much all there is of the story as well - the couple argue over whether to go ahead with it until the two-week deadline, and then deal with the fallout. Anna Kelsey's designs do a decent job of evoking a particularly grim corner of the 1980s (what a millionaire's doing there is anyone's guess) with Connolly's hairdo doing a lot of the heavy lifting as far as taking us back in time is concerned; to start with, anyway, I don't think the amount of hairspray needed to keep it in place for more than 20 minutes is legal any more, or certainly not ethical. 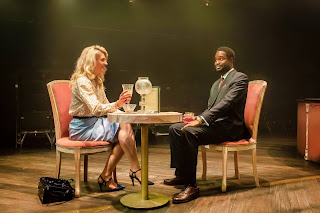 To be honest, after the largely depressing theatrical fare lately, part of me was hoping for an outright so-bad-it's-good show to rival Diana the Musical, but Indecent Proposal is absolutely not that kind of misfire. That's not to say there aren't some unintentionally arch moments: The table lamps looking like crystal balls don't do anything to dispel the impression that lounge singer Annie (Jacqui Dankworth) is about to ask you to cross her palm with silver; Larry seems to constantly alternate between being one of the most famous people on earth and being able to walk around a casino throwing around million-dollar chips unrecognised; and then there's Rebecca cheerfully yelling "HOW'S YOUR HYSTERECTOMY?" at Annie in the middle of a crowded room, which is I'm sure a 100% accurate depiction of how women talk to each other*. 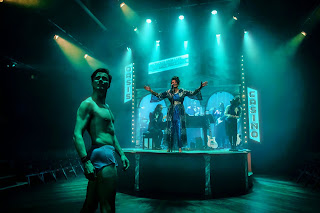 Where I thought it scored well was in the actual music: There's comparatively few songs as musicals go, but what Conley and Schlosberg do contribute is tuneful and decently catchy - I'd be quite happy to listen to most of the songs again. For the most part, the fact that half the characters are lounge singers means the songs are presented as part of their act, which means when characters do burst into song as part of their daily lives it feels out of place, but generally the songs (especially those sung by a show-stealing Dankworth) are a success. Less so everything between them; I don't know if it's Conley's book, Charlotte Westenra's production or most likely a bit of both, but the evening plods through the fairly bare story, and we get to know the characters far too little to care about their predicament. 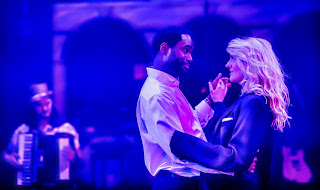 I couldn't quite put my finger on it until after the interval, but there's a sense of the production just going through the story beats without any real sense of an angle or commentary on them. It would make things feel flat in any circumstances but it's particularly unfortunate given the kind of story this is. At least we're not in Crack Whore: The Musical levels of glamorising prostitution, but even though the story is essentially downbeat I wouldn't say the blurb's promise of "reimagining the work through the lens of the current social and political climate" really holds up either. This is more the story of a wealthy asshole toying with some strangers' marriage for his own amusement, and if anything the game he's playing seems to be with Jonny, with Rebecca as the commodity they're playing over, rather than examining that commodification. If there's anything that feels topical it's a man who can afford to gamble with million-dollar chips having his ass kissed for giving out $2 tips. But while there's undeniably some strong elements here, Indecent Proposal doesn't convince that this downbeat Eighties story was crying out for the musical treatment.
Indecent Proposal by Michael Conley and Dylan Schlosberg, inspired by the novel by Jack Engelhard, is booking until the 27th of November at Southwark Playhouse's Large Theatre.
Running time: 2 hours 20 minutes including interval.
Photo credit: Helen Maybanks.
*"How's your yeast infection?"
"Ooh, don't get me started, I'm having to pour half a Yop down my gusset every hour on the hour, anyway back to Exhibit B Your Honour."
Posted by nick730 at 22:58