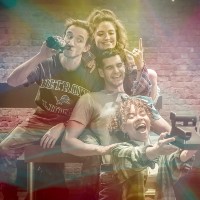 There are a few theatrical tropes I really should start putting money on: For example if a playwright says his play "is about hope, really," it's a pretty safe bet that just outside the theatre there'll be a trigger warning longer than your arm, to tell you it's a play about war, murder, suicide, prejudice, sexual assault and wound detail, really. Having moved from the Finborough to Southwark Playhouse's Little space, the annual Papatango playwrighting prize continues to upgrade to bigger venues, and its new home is the Bush's main house. Igor Memic's professional debut is actually the overdue 2020 winner; Memic comes from a Yugoslavian family, in the sense that that country still existed when they moved to the UK. And the play's setting is the town of Mostar, now in Bosnia-Herzegovina, but in 1988 a good example of Yugoslavia's many ethnic groups unsuspecting of the coming division: The Old Bridge of the title technically separates the Christian and Muslim parts of town, but in reality they, as well as a few Jews and people from a variety of other backgrounds, basically coexist quietly.
The bridge is also the scene of a dangerous annual diving contest, which in the opening scene Mili (Dino Kelly,) a Catholic newcomer, has unwisely decided to enter despite not really knowing the peculiarities of the local microclimate, which can blow people off-course. 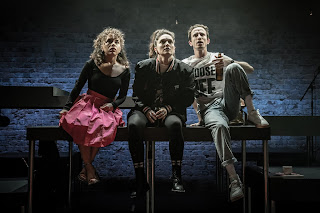 His dive is a very public embarrassment, but it catches the eye of Mina (Saffron Coomber,) a local Muslim girl he's been trying to flirt with. It kicks off the central love story, as well as bringing Mili into her circle of friends, Leila (Rosie Gray) and Sasha (Emilio Iannuci.) Both the relationship and the friendships stay strong over the ensuing years when war breaks out, and the Muslims of Mostar along with those sympathetic to them find themselves under siege. 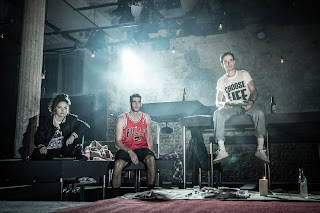 Memic's conceit is to play out the story in two contrasting styles: An older version of Mina, now going by Emina (Susan Lawson-Reynolds) and wearing a headscarf to suggest the events of the play have made her take more seriously a religion she only paid lip-service to before, narrates the story in a thoughtful, lyrically wistful style. But the action we see played out by the central quartet, even when it goes to very dark and violent places, maintains an energy and vitality that makes you believe in their underlying strength; Iannuci does a lot to help keep the spirits up with his tragicomic, wisecracking but increasingly obviously alcoholic Sasha. 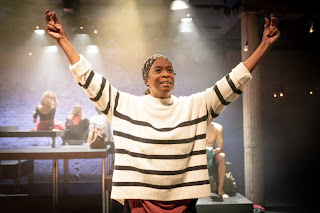 And if the play's a bleakly political romance, that romantic angle does hold up: Ridiculously tall, deep-voiced and, when he takes his shirt off for the diving scenes, sporting a torso that's basically triangular like Carrot from Discworld, Kelly is almost an implausibly perfect romantic leading man, so the way Coomber skewers his charms makes them a spikily charismatic couple. Selma Dimitrijevic's production plays out on a set made up of multilevel platforms by Oli Townsend, whose purpose may well be largely to even out the leads' heights. 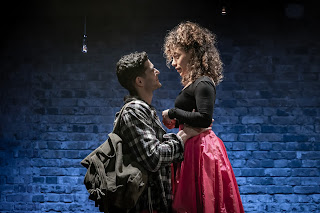 There's no shortage of work at the moment whose themes include how easily ordinary lives can descend into food shortages and chaos, so while it's an undeniably significant issue that's trending for a reason, it's probably best for my mental health that there's a bit of a gap coming up in my live theatregoing, and with any luck in the next couple of weeks lighter holiday fare will start showing up. But if the theatrical landscape is currently looking pretty po-faced, Old Bridge is certainly one of the stronger offerings out there, that does a better job than most at bringing forward the human resilience underlying its tragedies. Memic lets some of Emina's monologues get a bit indulgent - especially as it nears the end it feels frustratingly like we're being told when right behind Lawson-Reynolds are four people who could much more effectively show. But for the most part the contrasting styles work, and as well as a new author a cast who are mostly new to the London stage also use the show to make their mark.
Old Bridge by Igor Memic is booking until the 20th of November at the Bush Theatre's Holloway.
Running time: 2 hours 10 minutes including interval.
Photo credit: Marc Brenner.
Posted by nick730 at 23:22