PREVIEW DISCLAIMER: This is another one with a long preview period, and the official reviews aren't out yet. 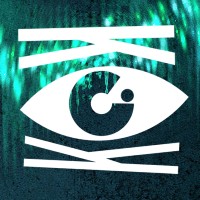 Rebecca Frecknall had a career-defining hit with Summer and Smoke, which she's capitalised on creatively with her ongoing associate role at the Almeida; now she makes a bold play to capitalise on it commercially as well, staking her claim as a name we could be seeing in the West End for some time: A reimagined production of Kander & Ebb's dark but enduring musical Cabaret, with not only a big-name cast but also a reconfigured Playhouse Theatre that tries to give the feeling of entering the eponymous Kit Kat Club in 1920s Berlin. With staggered entry times, the audience enters the theatre's basement and is guided around the dingy corridors, passing showgirls doing their makeup until eventually ending up at front of house to find their seats*. Once inside Tom Scutt's traverse design has replaced the Stalls seats with tables surrounding a raised revolve.
American novelist Clifford Bradshaw (Omari Douglas) arrives in Berlin during the last days of the Weimar Republic with the hope of finding subject matter to cure his writer's block. He finds it in the Kit Kat Club, and British singer Sally Bowles (Pirate Jessie Buckley,) who's just been fired from her headlining turn and invites herself to stay in Clifford's room. The story revolves around this pair and the other residents of their boarding house, run by Fraulein Schneider (Liza Sadovy,) a lifelong spinster now having a coy romance with Jewish tenant Herr Schultz (Elliot Levey.) But while these scenes operate as a traditional musical, with the characters breaking into song to reveal their emotional state, most of the best-known songs come from the cabaret itself, where we keep returning to the sinister Emcee (Eddie Redmayne,) whose elaborate numbers increasingly commentate on the changing political landscape as the Nazis rise to power. 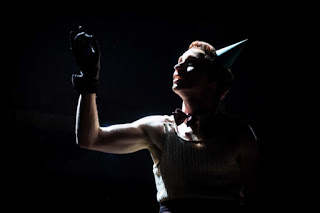 Despite big names the star here is the staging, which brings the wealthier sections of the audience into the action (the gorilla from "If You Could See Her" gets to clamber all over them,) and has been atmospherically (if perhaps a bit too cleanly for the grungy feel it's trying to evoke) created by Scutt. But there's no denying the audience is paying through the nose for this redesign - I can't review this show without mentioning the outrageous pricing structure† that sees top tickets go for upwards of £300, and the booking page currently shows most performances having nothing available under £200. Even the Grand Circle, where they usually chuck a couple of £15 seats for the plebs, is selling at £30-£50 for upcoming performances. The trade-off for this is at least that, like the Piccadilly Theatre, this section has finally been made fit for purpose: The tiny seats with a view of  the back of someone's head have been stripped out and replaced with just four, properly raked rows of seats, all with a bar to lean forward on and a clear view of the action (it'll remain to be seen how well that works when the proscenium arch is restored, but it can't be much worse than it was before.)
But finally, beyond all the baggage the production has before even opening, what do we get on this new stage? First and foremost, I don't feel I've been well-served by actresses playing Sally Bowles on stage in the past, so it's great to finally see one in Buckley who can both belt out the tunes as required, and convey that this is a horrifically broken character, a crumbling agent of chaos (the central contradiction of the role - the actor has to be good enough to do the songs justice, while playing a character who's a mediocrity at best.) Clifford doesn't have many musical numbers, but Douglas brings a kind of brittle nature to the show's storyteller, that reflects how desperate Sally must be to cling to him as her saviour. And I lied about being done with the baggage because of course Redmayne's casting has also had some controversy attached to it, as although it's not necessarily how it's written, the Emcee is traditionally a queer-coded character, most often played by an out gay actor. It probably wouldn't have been picked up on quite so much, to be honest, if this wasn't an actor who had to apologise for appropriating other LGBTQ+ roles in his career, even as he was rehearsing for this one. 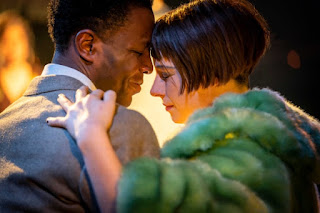 The justification was that Frecknall had a different approach in mind for the character, and I would say that ties into her wider vision for the show, which does in some ways deviate a lot from what we might expect from a story of hedonism and security being displaced by the specific threat of the Nazis. The setting remains the same, and the threat remains the same, but only where explicitly referred to by the text. Where the film and other productions have seen uniforms and jackboots increasingly dominate the visuals of the cabaret scenes, the only swastika we see here is the one revealed on Ernst Ludwig's (Stewart Clarke) armband in the party scene's shock twist. Instead the actual cabaret acts see the freakishness and inventiveness of the early songs suppressed by a more generic threat - "Tomorrow Belongs to Me" is one of the most famously chilling scenes in the film, whereas Frecknall's staging of it is so expressionistic it only really makes sense in hindsight. Instead of SS uniforms everyone starts wearing similar drab, brown office suits, and there's certainly a chutzpah to what the director's doing here: Treating comparatively recent and emotive history, and a musical so tied in with it, in the way we treat much older stories, as a specific hook on which to hang wider concerns. In this instance the suppressing of individuality and creativity by force, into a sea of unthinking worker drones. It's valid, and different, but it sends you out into the night with more of a gentle shudder, than the brutal gut-punch of an ending that exposes what we know was really waiting in the wings◊. 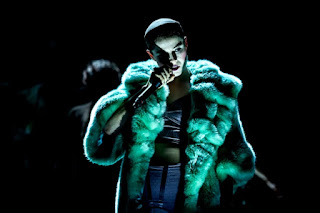 In this context the Emcee is no longer the focus of the story's queerness, which is evident in all the characters from the openly bisexual¶ Cliff to the Kit Kat club's whole ensemble. Redmayne's Emcee is more focused on the grotesquery of the character, who opens the show dressed like Pinocchio (Julia Cheng's choreography often suggests marionettes, until Buckley finally performs the title song as if her strings have been cut,) turns into Scorpius from Farscape, before fully assimilating into the brown suits, herding the others around. If you do choose to view Frecknall's casting of a straight cis white man as a conscious choice then it's in the way it ends that it makes sense. London productions of the last three decades have become notorious in how ruthlessly they've thrown the Emcee in with the millions of victims at the end, and it's hard not to wonder how far this would go next; when in fact Frecknall sends him in the opposite direction: Less ambiguous in his malevolence, this Emcee keenly joins the side of the oppressor, easily ditching his twisted persona to save himself. 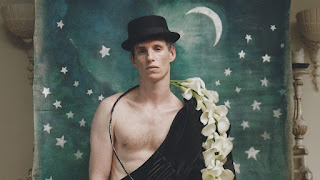 I did not know going into it how hard a review this was going to be to write, and I apologise if it's as incoherent to read as I suspect it is. It just goes to show why I like to go into a show with as few preconceptions as possible - whereas before it's even officially opened, this one seems to have accumulated as much baggage as got openly rifled through by Athens airport handlers in the 1980s. Trying to assess it on its own merits the production is definitely a striking one with strong performances, and you've got to admit Frecknall puts her own identity on the piece, regardless of what you might think about what that leaves behind. I did think there could have been a bit more connection between the big cabaret numbers and the scenes in the boarding house; the design on its own doesn't do all the work of making them seem like a coherent whole. Still, in among it all is a vibrant production and electric performances you can get to see up close. If you happen to be rich.
Cabaret by Joe Masteroff, John Kander and Fred Ebb, based on I Am a Camera by John Van Druten and short stories by Christopher Isherwood,  is booking until the 14th of May at the Playhouse Theatre.
Running time: 2 hours 50 minutes including interval.
Photo credit: Marc Brenner/Autumn de Wilde/Vogue/PA.
*at which point to be honest some more guidance would have been welcome, too many people milling around the crowded lobby for my liking, given the current circumstances; I knew where to go from past visits, and still got confused by the fact that they've painted over the signs pointing to the Grand Circle
†and look, I really try to avoid telling professional critics how to do their jobs, but any reviewer telling you about the show from the vantage point of their free seat who doesn't have something to say about the prices and the dangerous precedent they set? Not doing their jobs. I can just about accept this as a one-off attempt to pay for ATG's recent improvements to its theatres, and the losses made over the last two years‡, but someone needs to make sure this isn't the West End going full Broadway and pricing out everyone except the wealthiest
‡and this could still be a problem due to a Covid safety policy that strikes me as misguided: They're going in very strong with requiring a recent negative test confirmation as a condition of entry, but the flipside is they're not requiring masks indoors. Testing is good, but you could test negative today and positive tomorrow morning, or have a false negative, without even getting into how easy it would be to lie, since you can self-test and self-report the results§. While I wish everyone in the production the best, with the audience unmasked within a couple of feet of the whole cast, I wouldn't be particularly surprised if this went the way of Back to the Future and had to close for a couple of weeks for the cast to self-isolate.
§and if you've paid upwards of 300 quid for your ticket and feel OK you might be tempted to do exactly that, just saying※
※yes, it's footnotes within footnotes within footnotes, you knew I'd end up going full footnote Inception eventually
◊this does now make me wonder if the show could be in for further controversy over the way it skirts around the horrors underlying the story
¶if not outright gay and just... really confused about how he feels about Sally
Posted by nick730 at 23:46