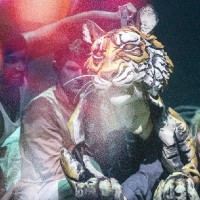 Another show I've had rescheduled a couple of times over the last 18 months, the stage adaptation of Life of Pi that originated in Sheffield finally gets its West End opening. Yann Martel's novel was a huge bestseller twenty years ago and has already had a CGI-heavy film adaptation, and its fantastical story of animals on the high seas lends itself to stage spectacle - if they could figure out how. Lolita Chakrabarti writes the adaptation and Max Webster directs, but it's puppet designers Nick Barnes and Finn Caldwell who ultimately make it possible. Piscine Patel, known as Pi (alternate Nuwan Hugh Perera) is an Indian teenager whose father (Nicholas Khan) runs a zoo. When 1970s politics turns violent and the family get stuck in the middle, they accept an offer from a Canadian zoo to relocate there along with all their animals. But along the way the cargo ship they're on sinks, and Pi is the only survivor.
Chakrabarti frames the story in a Mexican hospital where Pi has washed up, physically and emotionally drained, and is being interviewed by a pair of civil servants, the jobsworth Mr Okamoto (David K.S. Tse) and more open-minded Lulu Chen (Kirsten Foster.) It seems unlikely they'll get answers about how the ship sank from someone who got thrown off it into a lifeboat, but what they're really intrigued by is how he survived 227 days on the ocean without supplies. 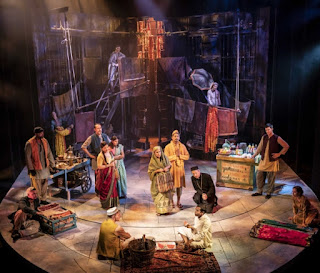 The story he spins is one of sharing the boat with a zebra, an orangutan and a hyena, all of which are quickly dispatched when a Bengal tiger called Richard Parker swims on board. Pi has to find a way to survive not just the elements but also the apex predator sharing the small space with him: He imagines visits from his father, mother (Mina Anwar,) and aunt (Syreeta Kumar,) who remind him how to assert dominance over the tiger, with comic relief from the author (Tom Espiner) of an outdated survival manual which regardless does help him find food and drinkable water. As things start to get more desperate a more sinister figure starts to appear to him, in the form of the ship's bloodthirsty cook (understudy Alex Chang.) 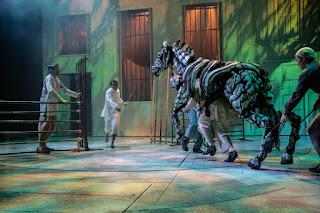 I said it was an opportunity for stage spectacle and Webster's production duly provides, largely through the animal puppets - I particularly liked how the Richard Parker puppet, which needs three puppeteers to work it, can manage authentic cat-like movements but also turns instantly into a grotesque anthropomorphised form when the hallucinations start to get more surreal (the killing of a turtle, though, is a bit more on the unintentionally funny side.) Caldwell's movement direction of the puppeteers does have a slow, floaty quality that I feel like I've seen in far too many shows by now and has become a cliché (and is it The Law that all shows featuring animal puppets have to introduce them with butterflies?) 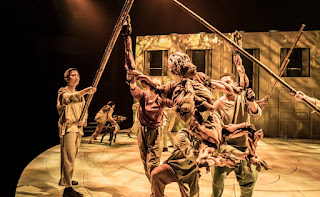 But for me the design highlight was Tim Hatley's set, which has installed a steeply raked, circular thrust bursting out of the Wyndham's proscenium arch, and uses a revolve and Tim Lutkin's lighting to turn a grey hospital room into the open water. I love a set change that's been hiding in plain sight, so the way the lifeboat materialises out of nowhere is a highlight*, while the way Hatley's set, with Andrzej Goulding's projections, allow Perera to dive into the water is another great surprise effect. 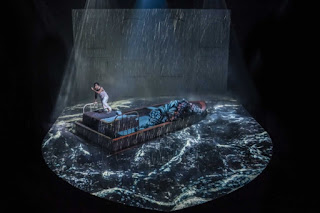 It's a long time since I read the original book, so I can't remember how I felt about it in any great detail, although I do think I was a bit underwhelmed with it, and on a story level that's how I came out of the production as well: The animal fable is a hook to hang philosophical musings on, mainly on religion (Pi is fascinated by all the religions in his home town and refuses to restrict himself to one; one of his biggest obstacles to survival is getting over the fact that it involves killing fish and turtles, which goes against his Hindu beliefs on vegetarianism) as well as a thread about storytelling itself, and the fictions we tell ourselves to cover up truths we can't handle in an unvarnished form. But these are touched on rather than particularly developed, and the story at times feels padded with unnecessary returns to the framing device. There's no question that this is a triumph of theatrical storytelling, and for kids who like their cute animal stories to come with sickening bone-snaps and bursting entrails it could be the start of a love affair with the stage. But the emotional engagement isn't quite there, and for all the flair in the telling, the tale and its themes come off feeling a bit slight.
Life of Pi by Lolita Chakrabarti, based on the novel by Yann Martel, is booking until the 29th of May at the Wyndham's Theatre.
Running time: 2 hours 10 minutes including interval.
Photo credit: John Persson. In the photos Pi is Hiran Abeysekera.
*although this may be more obvious if you're in the circles and looking down on the stage floor; we were in the stalls, which have also been reconfigured and provide a good view even from the back
Posted by nick730 at 22:57