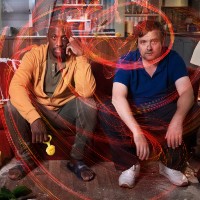 You could certainly call what the National Theatre's been on with Death of England a rollercoaster ride, as there have been sharp ups and downs ever since Clint Dyer and Roy Williams premiered what was then a standalone monologue: Michael's side of the story, about a man both mourning his father and confronting his racist legacy, was one of the venue's hits of the year. The fact that the year in question was 2020 is a clue to where the downs came from: The same team came up with Delroy, a sequel from the point of view of Michael's black best friend, which culminated in him having a baby with Michael's sister Carly - while also crtically well-received, this installment suffered first from appendicitis taking out its star, and then from a story set during the first Covid lockdown being cut short by the second. Having managed to catch Delroy on stage I guessed that Dyer and Williams might now have an eye to a trilogy, with Carly perhaps the final piece of the puzzle: I was half right.
The writers do in fact return to the story in what feels like a concluding part, but instead of a monologue from a new perspective we get Face to Face, which throws Michael and Delroy together, and it's a canny choice if you've seen the first two, as both men have given the impression of being unreliable narrators who may or may not be reinterpreting their stories as they recount them - now they can take each other to task and interrupt each other's narratives. 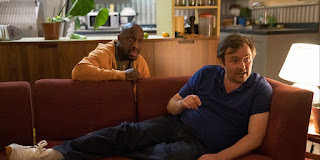 There's a new cast as Neil Maskell plays Michael, an appendix-free Giles Terera finally gets his chance at Delroy, and there's also a change of venue as - possibly not wanting to risk another early closure - we move from the stage to the screen: Face to Face was originally shown on Sky Arts last month and can be streamed on NOW TV. But there's still an essential theatricality to the play as the two men take turns delivering a monologue. The story's now taking place in the second lockdown, plus Delroy's still under house arrest. Add to that Carly's post-natal depression and Delroy's still not seen his daughter in person. When he's asked to take his niece out for a walk in her pram, Michael sees the opportunity to take her round to Delroy's flat, as both a nice gesture and a reconciliation after their big bust-up in the hospital in the second play. 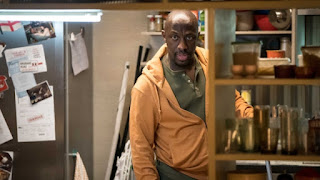 Seen as a standalone film, this does still cover the same wider themes of race, identity and toxic Englishness, all with an impressive refusal to simplify the contradictions in the characters, as the plays before it. Seen as a final part, it does feel as if the writers' motivations for revisiting the characters are mainly personal, and that the loose ends that needed tying up are in the fiery friendship that's lasted all their lives and constantly seems about to come to a stormy end. What Terera and Maskell portray really well here is the love between the men, and how it can easily be mistaken for hate. 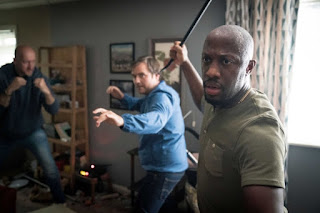 These plays have found (largely through the great use of humour) a way to present the two men being even more similar than they realise, with only the world's response to their skin colour differentiating the way they see it, without it being a cheesy old cliché about everyone being the same under the skin. Mostly this comes down to their shared, uncanny ability to go from zero to chaos in ten seconds: After Michael's eulogy meltdown and Delroy's run-in with the police, putting them both in a room together somehow culminates in an entire football team breaking down the door to beat them up. 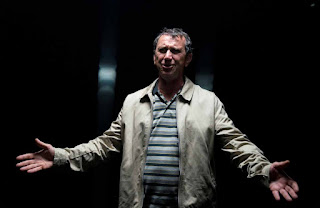 Dyer still serves as director in a production that does take advantage of the new medium to expand its world a bit - like the arrival of the aforementioned football team, as well as flashbacks to other characters, notably a Phil Daniels cameo as Michael's late, not-quite-lamented father Alan. But I still think this is likely to return to the stage somewhere eventually with the other two plays, perhaps as a trilogy rather than in rep as I initially thought (although they can probably stand alone there's a definite story progression that means a specific watching order, as well as a structural one as the two separate monologues turn into one shared one, that finally sees them stop talking via the audience and face each other.) Balancing the comedy with the darker depths as well as its two precursors, Face to Face does feel like a satisfying and even moving conclusion to the two men's story: These two are going to be there for each other for the rest of their lives, they just might tear each other to pieces a few more times along the way.
Death of England - Face to Face by Clint Dyer and Roy Williams is streaming in the UK on NOW TV.
Running time: 1 hour 20 minutes.
Photo credit: Steffan Hill.
Posted by nick730 at 16:44