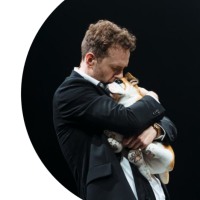 The National Theatre's website notes that Death of England opening at the Dorfman makes its co-writer and director Clint Dyer the first black British artist to have worked on its stages as actor, writer and director. It's worthy of mention but more significant, it seems to me, although probably harder to quantify in terms of firsts, is that Dyer and Roy Williams are two black British writers telling a story specifically about white Englishness in such a high-profile venue. In a frenzied tragicomic monologue Rafe Spall plays Michael, an Essex flower-seller whose father dies on his shoulder in the pub, keeling over suddenly when England get knocked out of the 2018 World Cup by Croatia. Fuelled by grief, alcohol and cocaine he tries to reconcile his feelings of loss with his deep-held disgust at his father's racism and increasing flirtation with the far right.

At the play’s centre is the funeral, at which the large turnout makes Michael publicly break down and deliver a drunken eulogy exposing the truth about his father’s views – not just about the world in general but about everyone there. 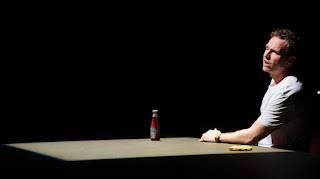 A recurring theme of Death of England is Michael’s father’s belief that there’s a time and a place for expressing his real feelings; on his flower stall he’d smile and serve all races because his living depended on it, and when Michael was a child he’d cover his ears at football matches when fans chanted racist abuse and threw bananas at black players. But at home he’d be frothing at the mouth with the rage and hatred he’d been suppressing, a bully who constantly demanded to know how his son voted in the referendum (Michael lies that he voted Leave; in actual fact he didn’t vote at all) and wallowed in racism and xenophobia. Michael paints a picture of his family as full of contempt and disappointment for him, although how much of this is an unreliable narrator reflecting his own self-loathing onto them is up for debate. 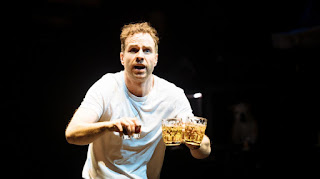 Where the play lost me for a while is in the extremes to which it takes the late father’s compartmentalisation of his conflicting views and ways of life; a meeting with a quasi-mystical Asian man after the funeral takes the story into an unexpected direction as a mystery. It’s a welcome change of pace at first but for me the plot’s repeated heel-face turns and toying with an almost fantasy-like element didn’t work. It’s better when it returns to being a character piece about Michael himself, and his own conflicts, typified by his growing up with a black best friend whom his father – ever able to compartmentalise – tolerated to his face but abused behind his back, and Michael never spoke up in his defence. Spall makes Michael a likeable narrator – albeit one you’d be nervous of being around in real life – but while he recoils from his father’s bigotry his own fatal flaw is one he himself recognises: He doesn’t feel passionately enough about the opposing view either, meaning he never becomes part of the solution. 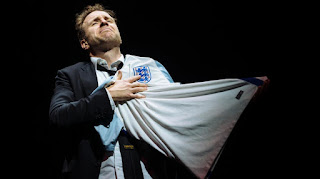 Needing as it does just one actor Death of England will probably be popular for fringe revivals where it will no doubt be made powerful by the intimacy, but with the Dorfman at their disposal designers Sadeysa Greenaway-Bailey and ULTZ give Spall the space for a different kind of performance: The stage is a huge St George Cross surrounded by shelves full of props that come into the story. In a frantic, spitting, sweaty performance (the front row will get wet) Spall runs up and down the catwalks in a frustrated fury building up his story. I had a swivel chair in the Pit; these seem to have gone up quite a lot in price since I booked mine but it’s a great vantage point to catch a 360⁰ view of the stage and Spall’s memorable performance on it. The character he’s created with the writers is one who truly wants to be a different man to his father, but one who you’re never quite confident will succeed. But Williams and Dyer end on a note of optimism that Michael, his family and the wider England they represent still can find a more positive way forward into the future.

Death of England by Clint Dyer and Roy Williams is booking until the 7th of March at the National Theatre’s Dorfman.