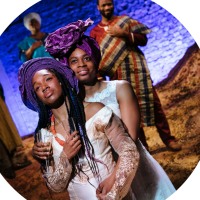 The Bush's current season opened with a commitment to telling the stories of queer women of colour, a theme that's revisited in the latest main-house show as actor Temi Wilkey's playwrighting debut The High Table follows the preparations for a British-Nigerian lesbian wedding. It's an event the family are going to have a lot to say about - and not just the living family. Tara (Cherelle Skeete) introduces her parents Segun (David Webber) and Mosun (Jumoké Fashola) to her fiancée Leah (Ibinabo Jack) for the first time three months before the wedding. They've been together for some time and engaged for nine months at this point, so the fact that Tara has put it off for so long suggests she's worried about their reaction. And while they, in theory, accepted her coming out as bisexual a few years earlier, this confirmation that their daughter won't settle down with a man after all makes them show their true colours, and they refuse to attend the wedding.

Having braced herself for this reaction, Tara carries on with preparations, but not being accepted by her parents has shaken her more than she'd like to admit, and it starts to put a strain on the relationship. 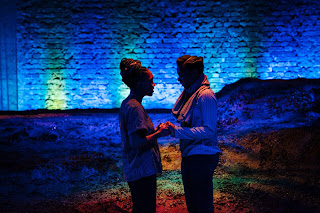 There is another force that can help or hinder them though, as somewhere between the living world and the afterlife a committee of Tara's dead ancestors has been convened to bless the union - or withhold the blessing. In fact I'd say more of the play takes place here than among the living, and Natasha Jenkins' set is a kind of ritual space, a remote hill with a space swept clean for the meeting. Here Adebisi (Jack) and Babatunde (Webber) argue against blessing a marriage that goes against their Nigerian values; but the centuries-old Yetunde (Fashola) remembers before colonial times, and her idea of traditional Nigerian values is very different. And things take a new turn halfway through when someone crosses from one side of the story to the other: Tara’s uncle Teju (Stefan Adegbola) dies suddenly and, for reasons that become apparent, is taken directly to join the council of ancestors. 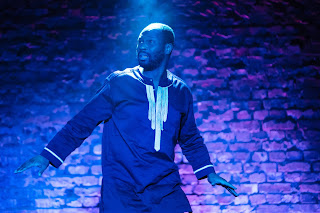 Wilkey’s confident debut goes to some very dark areas, as it deals not only with the way homophobia can tear families apart and the emotional pain it causes, but also the very real physical danger it poses in some parts of Africa; not to mention a quiet anger at the fact that is behaviour learned from Christian missionaries, and Nigeria’s own legacy of same-sex relationships might have been very different. There’s also sadness at the way family shame sees gay people swept under the carpet – Tara and her uncle each only find out the other was gay after Teju’s death, and both mourn the fact that they could have provided support for each other. Despite its serious intentions The High Table is predominantly a vibrant comedy-drama full of witty lines and larger-than-life (I guess literally, in the case of the spirits) characters, and an appealing central relationship thanks to Skeete and Jack’s chemistry. 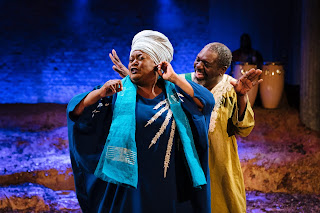 It’s not a flawless show; it feels about ten minutes too long, and Daniel Bailey’s production loses a bit of its energy in the second act. It doesn’t help that while the set’s designed in thrust, the action is largely blocked straight ahead; sitting at the side I felt a bit neglected, with the actors often in each other’s way – if I’d been further along the row I think I might have been looking at the backs of heads a lot. But for me the show started to get back on track as we got to Yetunde’s revelations about her own life on earth, and the Nigeria that worshipped old gods who didn’t care who you loved. It makes for an entertaining evening with some moving moments.

The High Table by Temi Wilkey is booking until the 21st of March at the Bush’s Holloway Theatre.