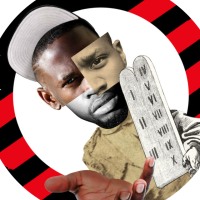 Over the years I've come to trust Indhu Rubasingham's judgement, which is the only reason I would book for a play whose blurb compares it to Waiting for Godot - especially so soon after putting myself through some actual Beckett again. Antoinette Nwandu's play about the ongoing epidemic of black Americans being shot by police turns the pair of tramps into homeless African-Americans living under a railway bridge, their inability to move from the spot not down to abstract existential dread but the very specific knowledge that anyone who tries to get away gets gunned down. Paapa Essiedu plays Moses, whose name, like the play's title Pass Over, references the other overt influence on Nwandu's play, the biblical book of Exodus, and while Moses himself often despairs, his friend Kitch (Gershwyn Eustache Jnr) has faith that he can lead his people to a Promised Land.

In lyrical exchanges the pair make lists of the things they would expect to see in this Promised Land; in darker moments they list the friends they've lost to police shootings. 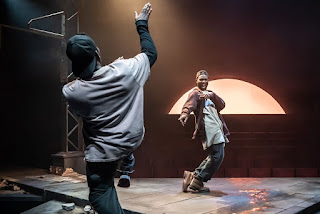 Mercifully only half as long as Waiting for Godot, there's also a vibrancy to Nwandu's writing that helped me like this more than any Beckett: Despite the bleak themes the comic dialogue works well, and the underlying anger is a much more dynamic emotion than despair. Essiedu and Eustache make an effective double act, Moses the more intelligent of the two with a commanding presence but the accompanying tendency to fall into depression, Kitch a more optimistic, likeable figure but one who also seems helpless in some ways and dependent on his friend. 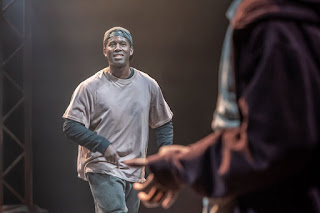 Another recurring theme in the play is the idea that the men and the country as a whole are still, in a way, living in the times of plantations. It's something that comes particularly to the fore when they're visited by Mister (Alexander Eliot,) a white man who's got lost on his way to his mother's house, and proceeds to lay on a picnic and generally act like a surreal Red Riding Hood. The scene also highlights the way Nwandu plays with racial language - the black men speak in a hyperrealistic street dialect where the N-word takes on an infinite amount of meanings, the white man's golly-gosh-gee refrain is a comic highlight of extreme politeness covering up his real feelings. Moses and Kitch wonder if swapping one dialect for the other could be the key to their survival. 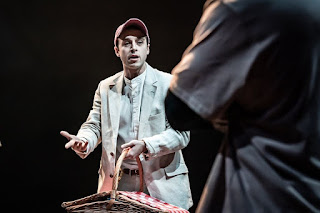 Rubasingham's production is the first to use the Kiln's new flexible auditorium to put a show in the round, and Robert Jones' design ties into the heavily symbolic writing with a traffic light that almost never turns to "Go," as well as concealing effects that, together with Oliver Fenwick's lighting, make for dramatic moments when the play leans more into its element of religious mystery. A memorable evening, despite wearing its influences on its sleeve Pass Over manages to create a unique and powerful identity of its own.

Pass Over by Antoinette Nwandu is booking until the 21st of March at the Kiln Theatre.