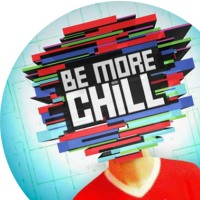 Is any other country's art as disproportionately about High School as America's? You have to believe that all the angsty teens we've seen on stage and screen for decades aren't exaggerating, and it's an experience that really does scar everyone for life if so many people are willing to spend the rest of their lives telling stories about it. The dog-eats-dog race to be popular gets a sci-fi twist in Joe Iconis (music and lyrics) and Joe Tracz' (book) Be More Chill, which felt to me like an endearing mashup of Loserville and Little Shop of Horrors. Alarmingly skinny video game geek Jeremy (Scott Folan) seems happy enough with his status as a loser who'll come into his own when he gets to college, but when the bullying gets too much for him and even Christine (Miracle Chance,) the oddball girl he likes, falls for a jock (Miles Paloma,) Jeremy becomes desperate enough to try anything to become more popular.

After a tip-off from bully Rich (James Hameed) he buys a dodgy pill from a shoe store which installs a supercomputer in his brain. Taking the form of The Squip (Stewart Clarke) it starts to instruct him on how to behave around others, seemingly able to predict the future and how to get Jeremy to the right place at the right time. 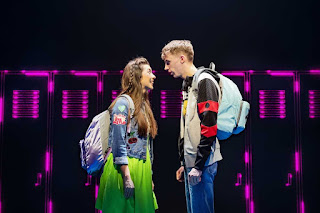 But early on it's apparent that The Squip's methods are going to leave a lot of innocent victims behind - its plan is to flirt with Brooke (Eloise Davies) then dump her for the girl he really likes, and unbeknownst to Jeremy the computer has made him unable to see or acknowledge his nerdy best friend Michael (Blake Patrick Anderson.) Also it may or may not have killed Eminem. It might be a cautionary tale about technology but Be More Chill is one of those shows that's hugely benefited from it, in the form of millions of streams of its cast recording, translating into popularity for the show itself. It's obvious from the enthusiastic audience at The Other Palace that it's doing a similar job here of attracting a new young theatregoing crowd, but although it's definitely got a young target audience I found it a lot of fun too. 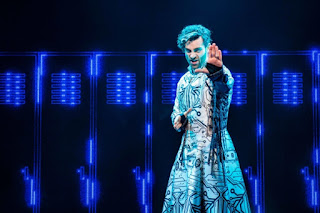 Stephen Brackett's production hits the right notes of silliness, enthusiasm, a touch of camp and just a little bit of underlying seriousness (there's a rather blunt, throwaway suicide reference) and the cast have a lot of fun, notably Clarke taking the opportunity to ham it up as an evil computer who dances in exaggerated jerky hand movements (choreography by Chase Brock.) The gags aren't always laugh-out-loud funny but there's plenty of highlights along the way - memorably a rewrite of A Midsummer Night's Dream to include a zombie apocalypse, and popular girl Chloe's (Millie O'Connell) downright disturbing Hallowe'en costume choice of "sexy baby." I found the character of Christine to be written too far on the irritating side of "quirky," but otherwise the characters are fun to be around for a couple of hours. I also enjoyed the fact that the - admittedly small - ensemble aren't just relegated to the background, with school gossip Jenna (Renée Lamb) and Jeremy's depressed dad (Christopher Fry) also getting their moment in the spotlight. 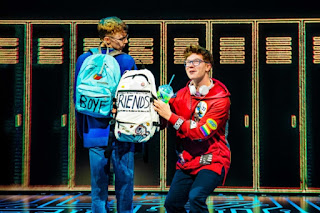 The cast, most of whom were new to me, are uniformly strong and energetic but the most regular scene-stealer is Anderson as the ambiguously queer Michael, who also gets the stand-out number "Michael in the Bathroom" (my sister whispered "that was a good one" after the song ended, and I'd been thinking at the time that I bet that's made it on the list of songs people do at auditions.) It comes early in the second act, which for my money has more memorable tunes in general, although the first isn't entirely without toe-tappers - certainly there's moments where you can see how the music alone got this show a fanbase. It also feels pretty current in its casual inclusivity, although I was hoping we might avoid the Richard Curtis ending of "if a girl's told you 27 times she's not interested, maybe the 28th will be the charm." Be More Chill has "not for everyone" written all over it but I'm pleased to say I'm not quite old enough yet not to find it endearingly charming and entertaining.

Be More Chill by Joe Iconis and Joe Tracz, based on the novel by Ned Vizzini, is booking until the 14th of June at The Other Palace.