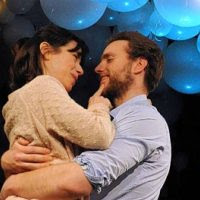 So far I've had a 50/50 response to Nick Payne's plays: If There Is I Haven't Found It Yet I liked, Wanderlust I was less convinced by. The former's star Rafe Spall reunites with Payne for the playwright's most high concept play yet, and his strongest. Constellations attempts to put quantum multiverse theory on stage in the form of a tragicomic relationship. Spall and Sally Hawkins play Roland and Marianne, a couple who meet at a barbecue and... What happens next depends on which universe we're in, as the short scenes are repeated with (often small) variations that can lead to very different results. This may be the only conversation they ever share, or they may get together. He might cheat on her, or maybe she cheats on him, and they separate. A fair amount of time later they meet again by chance and may or may not rekindle their relationship, even get married. As we watch these variables develop, every so often we jump to the end of the play, which in almost all the realities will have a sad conclusion. In its intimate way it's an ambitious play that economically says a lot about the decisions we make from one moment to the next.

With new plays the attention tends to be on the writing but the nature of Constellations makes us very aware of the work director Michael Longhurst and his cast have put in. The scenes sometimes differ by only a single word or not even that, leaving a lot of the variation in how things turn out down to nuance - how much saying something in a jokey way, or seriously, or in a hurt tone, can affect great chunks of your future. Andy (who hadn't seen If There Is... but enjoyed Wanderlust) was already a big fan of Hawkins', but he particularly mentioned Spall's subtlety in how he differentiated the alternate realities. Tom Scutt's design is very simple, the ceiling full of white balloons, the floor tiled in honeycomb shapes as a nod to Roland's job as a beekeeper. One problem though is that a raised in-the-round stage in a small space means you're often being blinded by looking straight into the lights, especially when the lighting (by Lee Curran) changes suddenly, as is part of the production's aesthetic. And though no fault of Payne's, I think 2012 has already used up its quota of a certain downbeat meme. Seriously, ENOUGH NOW. That aside, a haunting and unique experience.

Constellations by Nick Payne is booking until the 11th of February at the Royal Court Jerwood Theatre Upstairs (returns and day seats only.)