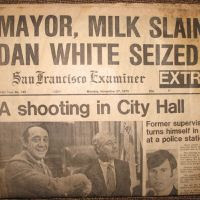 Written in 1982 and revised a few times subsequently, Execution of Justice dramatises the trial of Dan White (Philip Duguid-McQuillan,) who assassinated San Francisco mayor George Moscone and, more famously, Harvey Milk, the first openly gay man to hold political office in the US. Despite having gone to great lengths to smuggle his gun into the building, as well as reloading it between the two murders, White was only found guilty of manslaughter by the jury. Emily Mann's verbatim play seeks to explore why this verdict was reached, and is for the most part a reconstruction of the trial. Southwark Playhouse's main house is in traverse for Joss Bennathan's well-acted production. There are a few additional touches to the narrative, like testimony being intercut with snatches of interviews with people on the street (sometimes this overlapping's done a bit too much, especially as there's a tendency to cut characters off mid-sentence.)

This fairly literal interpretation does mean the play is as likely as a real trial to vary in interest depending on what evidence is being given. There's some longueurs as the details of White's actions on the day are painstakingly gone over. By far the most fascinating aspect is in the psychological evidence given to back up White's defence of diminished responsibility (made infamous as the "Twinkie Defence" after the argument that White's junk food diet was connected to his state of mind.) The fact that the play uses the exact words makes it all the more apparent what unashamed gibberish was seized on by a jury eager for an excuse to acquit. (Mann's play is pretty sympathetic to the prosecution team's efforts, but the fact remains they signed off on a jury that almost entirely had a similar background to White.)

I also enjoyed Madeleine Bowyer's performance as a prosecution witness with no intention of going anywhere until she's had her say. But while I found the production decent, I felt the play itself could be snappier. Ian said he really enjoyed it (even if we were both distracted by how much Ben Mars as the prosecutor looked like someone we know; though this wasn't as distracting as the behaviour of one group in the audience, who repeatedly strode out loudly, smirking, to get more drinks at the bar, until they were obviously stopped from re-entering.) For me, although not without its merits, the play made me think how far verbatim theatre has come since this was written.

Execution of Justice by Emily Mann is booking until the 4th of February at Southwark Playhouse.