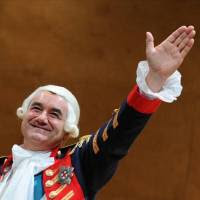 My first trip since starting this blog, to one of the theatres that gave it its title - although as I got an upgrade to the stalls, I can't report back on how much of the action you can see from the "cheap" seats: For once I could see all of the Apollo Shaftesbury Avenue's stage. (This show only had its Press Night last night, I suspect upgrades won't be as easy to come by later in the run.) The Madness of George III, Alan Bennett's sympathetic portrayal of the king's mental and physical illness (retrospectively diagnosed as hereditary porphyria, the blue piss being the giveaway symptom) gets its first London revival in Christopher Luscombe's production. Having starred in the (notoriously retitled) film version, Nigel Hawthorne is strongly identified with the title role, but Luscombe has cast the part well: David Haig, the country's foremost purveyor of sweaty panic, makes the role seem like it was written for him, and is hugely likeable as the monarch has the tables turned by doctors who suddenly find themselves with absolute power over him.

Bennett's play comfortably balances two aspects of the story, the private one of "Mr King"'s illness, and the constitutional crisis it provokes. With his heir Prince George, later George IV (Christopher Keegan) supporting Fox's (Gary Oliver) opposition, the opportunity to have the Prince installed as Regent is a threat to the Prime Minister, and the king's favourite, Pitt the Younger (Nicholas Rowe.) The play juggles the various plots and shifting allegiances, both in politics and among the doctors vying to get their choice of bizarre remedy adhered to (and Bennett gets a lot of comic mileage out of the genuine medical ignorance of the time.) The production originated at Theatre Royal Bath, which always gives me some trepidation as I find its house style to be a very stilted "Heritage Theatre." Though not smelling of mothballs to quite the extent of some past productions, there is still something unadventurous about this, something of Bennett's mischievous side is missing from proceedings. The supporting cast is strong (Beatie Edney is warmly sympathetic as "Mrs King") but struggle to get noticed in a show centred so strongly on its protagonist. At least Haig is excellent, reining in some of his tendency towards overselling a performance, and pitching the king just right. Plus the second act is stronger than the first, which is always the better way round.

The Madness of George III by Alan Bennett is booking until the 31st of March at the Apollo Shaftesbury Avenue.