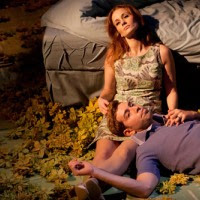 For the second night in a row I'm at a play featuring a long-married couple right at the end of the woman's life, which is a bit unfortunate as it's hard to take tonight's show entirely on its own merits. At least Frantic Assembly's Lovesong is the superior show by some way. Written by Abi Morgan, Lovesong shows us British dentist Billy and his librarian wife Maggie, who moved to small-town America about 40 years ago, alternating between those early days of their marriage and the final week as Maggie prepares for her death. Edward Bennett and Leanne Rowe play the young couple, Sam Cox and Siân Phillips their older selves. The action is kept pretty simple but stays interesting throughout, the younger duo creating their memories together, the older not always recalling them as they package up the belongings they've built up along the way. (One stark contrast with And No More Shall We Part is that here Maggie's decision to choose when she dies has been made and discussed offstage, Morgan's narrative more interested in presenting the whole picture of how this rounds off the couple's life, than in presenting the moral dilemmas.)

This being Frantic Assembly, directors Scott Graham and Steven Hoggett keep things visually interesting with sparingly-used projections and ventures into dance - though at times they jar, at others these movement sequences add much to the show's heart, and Carolyn Downing's sound design is hauntingly used. The performances are excellent as you'd expect, although knowing how good a comic actor Ed Bennett is, it always feels a bit of a waste seeing him in a straight drama.

The story is overshadowed by the couple's inability to have a child (I think the point of them having moved to America was to have them take a while to make friends, leaving them with only each other in the absence of a child) and once again there's suggestions of infidelity (though here it felt more organically integrated into their life story.) Jan was my theatre companion tonight and he felt the fact we largely saw them in difficult times was suggesting they'd had unhappy lives overall. I wouldn't agree, I thought the way the older couple were still going strong said that ultimately we were being shown a happy relationship. The unfortunate timing of another of my accidental "theme weeks" meant I was kept at a bit more of a distance than I might perhaps have been. No such problem for much of the audience, which despite the Lyric Hammersmith's usual high percentage of (well-behaved¹) school parties contained rather a lot of audible sobbing by the end.

Lovesong by Abi Morgan is booking until the 4th of February at the Lyric Hammersmith.

¹except for the one girl in the row in front of us who I'm sure spent much more time looking at her phone's brightly glowing screen than at the stage
Posted by nick730 at 23:23