Theatre review: The Animals and Children Took to the Streets 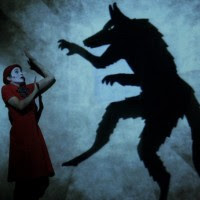 Having started at BAC and toured extensively, multimedia company 1927 (named after the year Fritz Lang's Metropolis was released) play a short run at the Cottesloe with The Animals and Children Took to the Streets. Suzanne Andrade, Esme Appleton and Lillian Henley, in white face paint, play all the roles against the backdrop of Paul Barritt's projections. The animations have the feel of 1980s Eastern European cartoons and there's Cyrillic-style text but the unnamed city has a touch of London about it as well. Crumbling estate The Bayou is as infested with children as it is with cockroaches, and when some of them invade a local park in protest at their living conditions, the city's Mayor comes up with a drastic solution to keep the underclasses quiet.

The dark political fairytale also features an unrequited love story between The Bayou's caretaker (voiced by James Addie) and an idealistic newcomer to the estate. The show's political message may not be subtle but it's performed with a light touch and many moments of humour. In what is still a developing new genre, it also features probably the best-coordinated interaction between live actors and animated elements I've seen yet. It's a rather charming show with its own particular aesthetic, and an interesting start to 2012, even if I'm not entirely sure what it's all about.

I saw this with Richard, who has an unusual track record in picking shows with unexpected male nudity in them; before tonight's show started I mentioned that, with an all-female cast, this at least would be an exception. So I got a nudge halfway through the show when a naked cartoon man, running down the street with bouncing genitals, appeared on the screen.

The Animals and Children Took to the Streets by Suzanne Andrade and 1927 is booking until the 3rd of January at the National Theatre's Cottesloe.

Email ThisBlogThis!Share to TwitterShare to FacebookShare to Pinterest
Labels: 1927