Having played a part in Lazarus existing, Ivo van Hove has a chance to redeem himself with the classic reinterpretations he does best. He brings a production he originally staged at his own theatre to the National, as Ibsen's Hedda Gabler gets a new translation by (inevitably) Patrick Marber, and Ruth Wilson plays Hedda, married for six months and already deeply regretting it. The daughter of a celebrated and wealthy general, she grew up the centre of attention, including from numerous male suitors. After telling a series of seemingly innocuous lies, and in a sudden moment of paranoia about getting older, she agreed to marry the academic Tesman (Kyle Soller.) By the end of their extended honeymoon she's realised she'll never care about the esoteric subjects her husband fixates on, while he'll never be able to keep her in the style she's accustomed to unless he gets a professorship.

And a couple of her former admirers are still around, including one who could threaten that professorship - the alcoholic Lovborg (Chukwudi Iwuji) has been recovering and found his inspiration again in Mrs Elvsted (Sinéad Matthews.) Together they've written a manuscript that could make him a star. 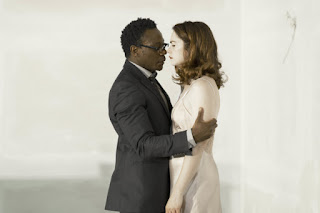 It all leaves the possibly-pregnant Hedda feeling desperately trapped in her marriage, and her way of trying to feel in control again involves some brutally aggressive manipulation of those around her. Hedda is regularly described as the female Hamlet, in part because there's a similar opportunity to interpret the role in a variety of ways. This is only my second production of the play so I can't say how much I agree with that, but it's certainly true that where I wasn't sure what to make of Sheridan Smith's Hedda, Wilson leaves us in little doubt, from the moments as the audience enters when she jabs tunelessly at a piano, that her take is of a woman in a deep depression that those around her have failed to pick up on. 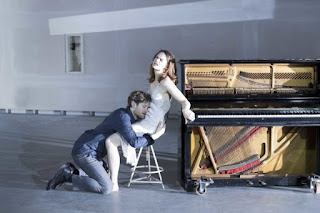 It doesn't make her extraordinary cruelty any more excusable but it does explain a lot about how desperate she is to take back control. Jan Versweyveld provides another of the stark white box sets we associate with him, here with dark unpainted blocks on the walls that remind us it's waiting to be redecorated - supposedly Hedda's dream home, the reality is of an empty space they can't furnish until Tesman gets his promotion. As well as Wilson's finely-tuned pain, there's interesting ideas around all the other characters, Soller far from the dry and dull academic, he's actually a man of great passion for his work, it just happens to be a passion that in no way intersects with those of his wife. (In other news, van Hove has him lounging around barefoot swinging his feet towards the audience so much, this sometimes feels like The Kyle Soller Foot Fetish Show, at least until he puts his hideous slippers on.) 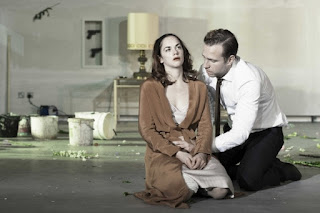 Rafe Spall as Judge Brack, another of Hedda's former admirers who remains single so he can have affairs with all his friends' wives, is more sleazily threatening than charming flirt, while Kate Duchêne occasionally sweeps imperiously through the action as Tesman's aunt Juliana. Characters enter and exit through the auditorium throughout, but the maid Berte (Éva Magyar) sits at the side of the stage throughout, an even lonelier and unhappier figure during Hedda's histrionics (although I'm not sure what van Hove's trying to say when he has her silently assist Hedda in destroying Lovborg.) But apart from a couple of questions like that this is another radical but horribly clear staging from van Hove, whose stripped-back naturalism turns into something a lot more expressionistically nightmarish as the climax approaches, making a magnetic evening turn into something horribly tense.

Hedda Gabler by Henrik Ibsen in a version by Patrick Marber is booking in repertory until the 21st of March at the National Theatre's Lyttelton (returns, day seats and rush tickets only.)