Theatre review: The Little Matchgirl and Other Happier Tales 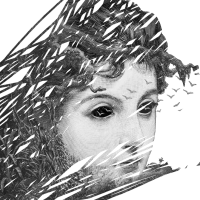 "Candles are so much better than electricity, aren't they?" Emma Rice's family Christmas show for Shakespeare's Globe opens with a gag about her drive-by Artistic Directorship of the venue, and the row over a lighting rig that'll see her leave in 18 months. Things don't stay quite as meta for the rest of The Little Matchgirl and Other Happier Tales, in which Rice and Joel Horwood adapt three Hans Christian Andersen fairy tales, held together by the story of the titular sinister puppet. The homeless matchgirl meets Ole Shuteye (Paul Hunter,) who says they can warm themselves up not just with the matches but also with stories - for every match they strike, Shuteye and his troupe of actors will act out a story, starting with "Thumbelina" (Bettrys Jones, cast against type as an adult woman, admittedly a very small one.) I don't think "Thumbelina" was a story I heard or read particularly often as a child because I didn't really remember much of what happens in it.

I certainly didn't remember quite how rapey it is - Thumbelina spends most of her time trying to get away from animals who want to "marry" her. The production has certainly kept a bit of an eye on its adult audience with subtext that extends to her straddling the Swallow (Kyle Lima) she nurses back to health. 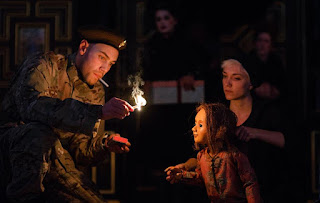 The comedy highlight of the evening is in the central telling of "The Emperor's New Clothes," which is largely stolen by Jones and Jack Shalloo as the camp German "designers" who con the Emperor (Hunter,) although the reveal of the "naked" Emperor is a gag that took both adults and kids by surprise. Finally "The Princess and the Pea" gets a bit of a makeover as Akiya Henry's Princess has no time for Shalloo's Prince's games. It's a show with a real sense of fun although the framing device also makes for a touch of Dickensian commentary on those in need of help at Christmas. 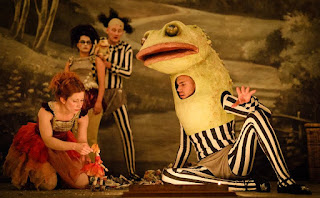 Horwood's rhyming couplets are often witty and Rice is in her element with the Edwardian vaudeville style she's chosen for the production; the cast are talented (though a couple of them suffer from the songs being arranged out of their range, something there's really no excuse for with original music,) and throw themselves into the silliness - from moonwalking toads to characters waiting so long they end up providing their own muzak. As Christmas treats go I can't see this attracting particularly big families, not at Swanamaker prices (I didn't even notice any child discounts) but for those children who do get taken to it this is a good introduction to storytelling theatre, and for adults it's charming although, given the familiarity of the stories, the takes on them aren't quite distinctive enough to make it stick in the memory for too long.

The Little Matchgirl and Other Happier Tales by Hans Christian Andersen, adapted by Joel Horwood and Emma Rice, is booking in repertory until the 22nd of January at the Sam Wanamaker Playhouse.