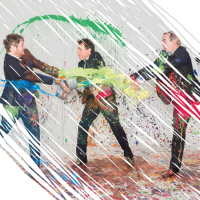 Florian Zeller is the French playwright who's all the rage in London at the moment, but in the nineties that title belonged firmly to Yasmina Reza. A few of her plays got West End runs but it was "Art" that brought her to public attention and became a big hit. Matthew Warchus' production ran for eight years, its gimmick of replacing the three-strong cast every couple of months keeping it in the public eye and ticket sales going strong. With Warchus now in charge of the Old Vic he's seen an opportunity to revive the play for its 20th anniversary. In fact he may well be said to be reviving the same production - I saw that twice, with one of the early cast changes at Wyndhams* and then a few years later when it had moved to the Whitehall Theatre (before it became Trafalgar Studios.) And though it's been a while this feels familiar: The latest trio to play the 40-something men who've been friends for 15 years are Rufus Sewell, Tim Key and Paul Ritter.

Serge (Sewell) has always had an interest in modern art, but he's now taken this a step further, paying €100k for a 1970s painting by an artist currently back in fashion; it's an all-white background with diagonal white lines. 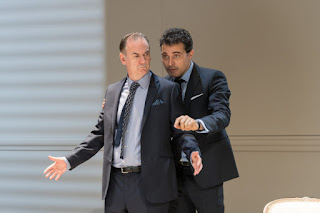 His best friend Marc (Ritter) is infuriated by Serge spending that much money on an all-white painting, but the fact that Serge insists it's not merely an investment and he really loves it, is what pushes him beyond all reasonable reaction. Their mutual friend Yvan (Key) becomes their battleground as each of them tries to get him to agree with their opinion of the painting. But Yvan, who's already stressed because he's organising his upcoming wedding, is a natural fence-sitter and doesn't want to take sides. So as well as each other, Marc and Serge now turn on Yvan in frustration at his timidity. 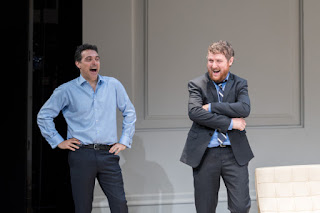 So "Art" (there seems to be some indecision about whether inverted commas are part of the title or not; it does fit the play's theme to leave some question over whether it's really art or not) is a midlife crisis play about three people whose friendship is a lot shakier than they realised; and about a particular kind of middle-aged pretentiousness. I wasn't sure how well it would bear up - although art remains a matter of taste, modern and conceptual art is a lot more widely accepted and not the punchline it was 20 years ago. But although I can't imagine the play having the same kind of success now that it did first time around, it's stood the test of time better than I expected. The relationship between the men isn't one I particularly recognise, but keeping the French setting helps put a cultural divide in that means we can accept their preoccupations as plausible. 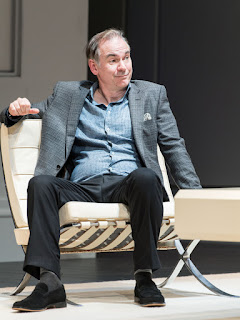 Mark Thompson's design is a minimalist white apartment whose back wall revolves to show a different painting in each man's flat: Some generic impressionism in Marc's, a "daub" Yvan's father painted in his, and a blank wall in Serge's, waiting for the white painting to be hung up. As well as Thompson Warchus has brought back the rest of the original creative team, with lighting by Hugh Vanstone and music by Gary Yershon; the setpiece scene of passive-aggressive olive-eating is one I remember well from before, which adds to the feeling that this is essentially the same production dusted off. But the cast's obvious enjoyment of the script carries to the audience, and while Key's Yvan has a lot of the big comic speeches, Ritter steals it with his precisely-timed one-liners, as well as getting the evening's big visual punchline. It still seems a bit unlikely to think what a huge phenomenon this was first time around, and it's neither gut-bustingly hilarious nor quite as insightful as it might once have seemed, but it remains an entertaining enough evening on its own terms.

"Art" by Yasmina Reza in a translation by Christopher Hampton is booking until the 18th of February at the Old Vic.

*This was back when I still bought programmes for everything and had the room to store them, so: 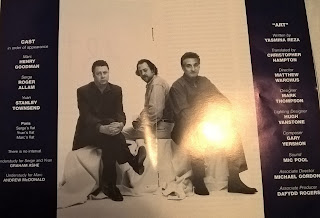