Theatre review: Once in a Lifetime 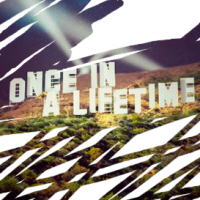 It's fair to say my past experience with director Richard Jones' work hasn't been stellar; at least I didn't leave his last three shows at the interval, but that is partly down to the fact that they didn't have intervals. I've liked a couple of his shows though so went along to his return to the Young Vic, and though it's lacking in some crucial ways at least I wasn't tempted to take an early bath. Once in a Lifetime is a product of the ten-year playwrighting partnership of Moss Hart and George S. Kaufman, who had numerous Broadway hits, in a version restructured for 12 actors by Hart's son Christopher. (Not that 12 is a tiny cast, but it seems as if the original required so many bodies it became prohibitively expensive and nobody wanted to revive it.) It's obvious why extravagance might have been on the playwrights' agenda though as their subject is Hollywood, and the particular excitement after the first talking picture was released in 1927.

Vaudeville act Jerry (Kevin Bishop,) May (Claudie Blakley) and George (John Marquez) are touring the USA with their failing act when Jerry suggests they jack it in to take advantage of the new opportunities in Hollywood. 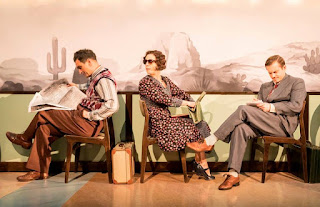 Particularly the fact that silent movie stars won't necessarily be good speakers, so they pass themselves off as elocution experts, with a little help from influential gossip columnist Helen Hobart (Lucy Cohu.) Studio boss Glogauer (Harry Enfield) turned down the opportunity to make the first talkie and is desperate not to make the same mistake with the next big thing, so he's easy to convince to give them their own school on his lot. But while the cunning Jerry and May's plans never quite come off, the dimwitted George's blunders always seem to work out for the best, and the idiot of the group becomes lauded as the new genius of Hollywood. 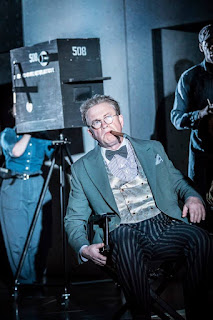 Whether it's the original script, or Hart Jr's tinkering with it that's done it, Once in a Lifetime is a bit all over the place, plot-wise - the elocution school story fizzles out into the plot of George insisting his amusingly wooden actress girlfriend Susan (Lizzy Connolly) should star in the studio's next movie, and his catalogue of disasters that somehow turn into successes is developed a bit late in the day; a subplot about forgotten playwright Laurence Vail (Daniel Abelson) really doesn't go anywhere either. The play's creaky plotting is only really noticeable thanks to Jones' production being just that little bit lacking in timing: This is a strong cast and the individual performances are fine*, but it feels slightly under-rehearsed in the way it never quite reaches the heights of snappy screwball comedy. It also seems to have been rehearsed without the set's peculiarities in mind - Otto Farrant's German director always flouncing out of the room loses something when the doors don't shut behind him properly and a stage hand needs to help out. 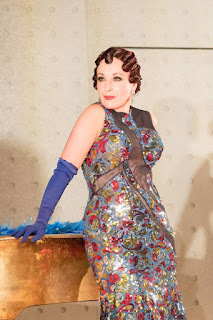 There are definite highlights though, not least from Amanda Lawrence's flustered receptionist, one character who does help raise the energy. And another star is designer Hyemi Shin - not-quite-closing doors aside, the revolving set is effective and memorable, but the real showstoppers are the costumes. Costumes are rarely something that make a big impression on me but the OTT designs, particularly of Helen's dresses, straddle a fine line of being just about plausible as 1920s glamour while being that little bit ridiculous to add to the comic tone - a few of the gowns got gasps when they first appeared. This isn't a bad night out all things told but it comes with a real feeling that while you're watching something enjoyable enough, it could have been kicked up a notch into a really hilarious evening.

Once in a Lifetime by Moss Hart and George S. Kaufman, adapted by Christopher Hart, is booking until the 14th of January at the Young Vic.

*although given the cast's calibre there's some surprisingly wobbly American accents - this might be contributing to the timing not being as snappy as it should be. Only Buffy Davis as Susan's mother doesn't struggle.
Posted by nick730 at 22:48