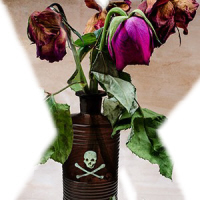 "Ah well, you did your best and it wasnae very good... And that's a fair epitaph for most of us." Obscure mid-20th century plays really are delivering the best lines at the moment, this one courtesy of the Finborough's current alternate show, James Bridie's Dr Angelus. Set in 1920 and inspired by a true crime story, it follows recently-qualified Dr George Johnson (Alex Bhat,) who's moved to Glasgow to take a too-good-to-be-true partnership with the eccentric Dr Angelus (David Rintoul.) His gratitude and respect for the older man let him overlook some suspicious behaviour - like the fact that his heavily-insured mother-in-law only gets sicker the more Angelus treats her, and when she finally dies he insists Johnson sign the death certificate. George keeps his silence even when Angelus' wife (Vivien Heilbron) starts exhibiting the same symptoms her mother did.

The Finborough's rediscovery strand has been hitting a good seam of enjoyable plays recently, and Bridie's comedy-thriller follows that trend. 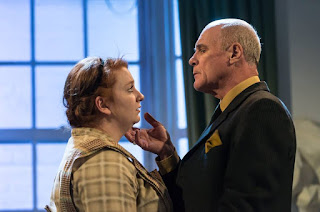 While there is something sinister to Dr Angelus from the start, Rintoul plays him as hiding in plain sight by making him a Large Ham who blusters and flaps any time someone even hints at impropriety in his treatments, or the fact that his mother-in-law's illness doesn't remotely conform to his diagnosis. Everyone else in town views Angelus with suspicion, although this does seem to be largely down to the fact that he studied (and presumably also had his tea) in Edinburgh. 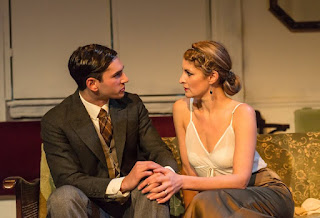 There's a whole lot of Scottish exuberance contrasting with George's English repression which, fatally for some, stops him from questioning his mentor, but also makes for some broader comedy when the unhappily married Mrs Corcoran (Lesley Harcourt) keeps making appointments to see the handsome new doctor, presenting symptoms that require her to fling her clothes off whenever she's in a room with him. The suggestion of impropriety with a married patient is also a handy blackmailing tool for Angelus to use any time George tries to look too deeply into his practices. 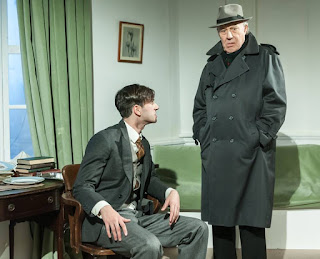 Bridie's play is satisfyingly plotted - including a drunk and unhelpful maid (Rosalind McAndrew) whose behaviour makes more sense as the story goes on. It does falter a bit at the end - I got the distinct impression Bridie wasn't sure how to finish the play, and keeps going for another fifteen minutes after the plot's conclusion, labouring his point. At least he does this with an entertaining character, Malcolm Rennie's blunt Inspector McIvor (but again, that "bluntness" extending to his casually punching a pregnant woman in the back is an unnecessarily nasty touch.) Inspired by a dream sequence in the final act, Jenny Ogilvie's debut production as director tries to introduce some surreal touches that don't always gel with the tone elsewhere, but for the most part this is an entertaining slice of black comedy.

Dr Angelus by James Bridie is booking in repertory until the 20th of December at the Finborough Theatre.