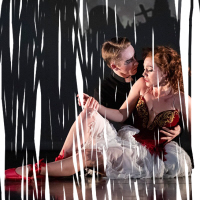 Time for one of my very occasional dips into the world of dance - this year my mum decided she'd like to be taken to the ballet for Christmas, and when she heard that Matthew Bourne had adapted a film she remembers fondly, The Red Shoes, into a new ballet that decided it. Bourne's also looked to the cinema for his music, choosing the work of Bernard Herrmann - best known for scoring Hitchcock films, although most of the music used here predates that collaboration. In many ways the story is a natural fit for a ballet as it's about ballet: Victoria Page (Ashley Shaw) is a dancer in the Ballet Lermontov who's never really caught the attention of its conductor Boris (Sam Archer,) and so has never got further than background roles. That's until prima ballerina Irina (Michela Meazza) is injured on tour.

Victoria now has to take the lead in a new ballet of the Hans Christian Andersen story The Red Shoes, becomes a hit and also falls for its composer Julian (Chris Trenfield.) 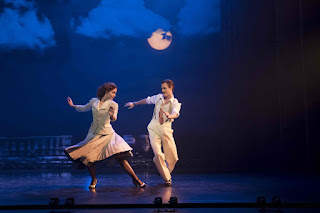 It's only now that Boris Lermontov notices her and wants her for himself, and Victoria's forced to choose between her career and Julian. As something of a homage to more classical ballet, this isn't quite as unconventional as some of Bourne's work, but still has the occasional jerky modern touch, particularly from Dominic North as the Lermontov's gay lead male dancer Ivan. 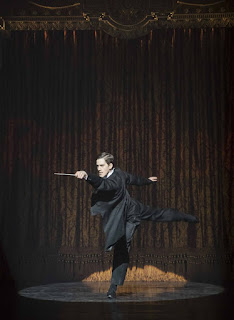 I'm not sure if the storytelling is quite as clear as in past Bourne shows I've seen, but then I wasn't as familiar with the story going in as I usually am - I must have missed Boris firing Julian, so wasn't sure why he and Victoria stormed out. It looks great though, Lez Brotherston has centred the set design around a second proscenium arch that spins and wanders around the stage - it must have some pretty complicated rigging in the flies to help it move around quite so freely. 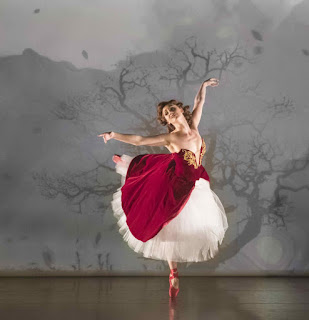 For me the highlight was the ballet-within-a-ballet that ends the first act, in which Victoria and Ivan perform the original fairytale - Brotherston with Paule Constable's lighting make it very visually arresting, particularly when a black-and-white scene of shadowy dancers turns into a red hellscape. The short second act didn't live up to the best moments of the first one for me, but while it didn't always hold my attention as much as some past Bourne shows I wasn't bored.

The Red Shoes by Matthew Bourne and Bernard Herrmann, based on the film by Michael Power and Emeric Pressburger and the fairytale by Hans Christian Andersen, is booking until the 29th of January at Sadler's Wells (returns only,) then continuing on tour to Woking, Birmingham, Milton Keynes, Norwich, Nottingham, Cardiff, Southwampton, Bradford, Bristol, Wimbledon, Canterbury, Newcastle, Edinburgh, Leicester, Wycombe and Salford.