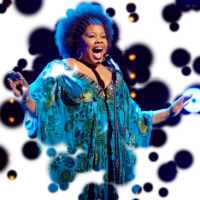 Not every Broadway hit makes a quick move to the West End but Tom Eyen and Henry Krieger's 1981 show Dreamgirls taking until 2016 to make it to London must be one of the longest delays. The film adaptation a few years ago can't have hurt it finally making the trip, as it now has an enthusiastic audience ready for it, so the vast Savoy is the venue for Casey Nicholaw's production of a story set in the 1960s and '70s, about black music making a play to break out of its "specialist" niche and into the pop mainstream. Girl group The Dreams are childhood friends Effie (Amber Riley, doing this to supplement her income because her day job as a Dream Ghost doesn't pay so well,) Deena (Liisi LaFontaine) and Lorrell (Ibinabo Jack,) who sing original songs composed by Effie's brother C.C. (Tyrone Huntley.) Shifty producer Curtis (Joe Aaron Reid) convinces them to take a job as backing singers as a stepping stone to their own career.

Touring with the flamboyant Jimmy (Adam J Bernard) gets them a spotlight, but this is when Curtis decides that despite Effie being agreed to have the best voice, it will be Deena who's promoted as the face of the group. 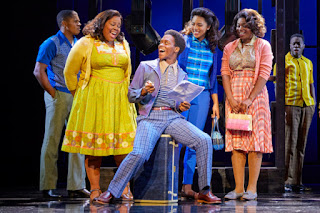 Effie's resentment and constant diva tantrums eventually see her replaced in the band and struggling to launch a solo career with her confidence knocked; while Deena ends up in an unhappy marriage with Curtis. I haven't watched the film version so the show was new to me; what I liked most about it was its insistent energy. There's a handful of well-known songs from the show, but even if the rest aren't as strong they're still tuneful and the show doesn't let up delivering one after the other - there's barely any dialogue that isn't sung, and the story is simple enough that it comes across through the non-stop song and dance. 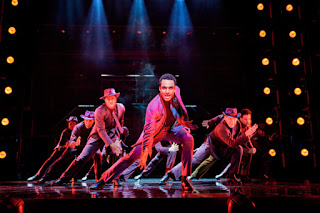 Riley is best known for Glee, so her star wattage is I guess middle-tier, but it's paid off that the producers went for her rather than someone super-famous: She's popular enough to draw a crowd and has more than enough vocal power to justify it once they're there. Her big moment is of course first-act closer "And I Am Telling You I'm Not Going" but there's plenty of other opportunities to demonstrate her belting voice. 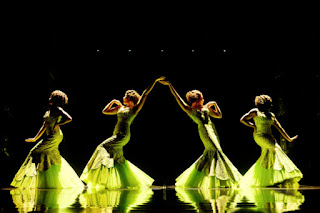 She's well-supported - Reid doesn't quite live up to the vocal power and charisma of the rest of the cast but LaFontaine is a good foil, Bernard has a ball with his Little Richard-like character, Nicholas Bailey is a steady figure in a crazy world as a more reputable manager, and Huntley lives up to the promise of his breakthroughthis summer. Much as I enjoy well-used projections, there's something pleasingly lush to having the show's budget right there visible on stage in Tim Hatley's sets (my sister wants the finale's beaded curtain for her flat) and Gregg Barnes' costumes. Dreamgirls will no doubt be taking a lot of money off people for their night out but both in star power and production values they shouldn't feel short-changed.

Dreamgirls by Tom Eyen and Henry Krieger is booking until the 21st of October at the Savoy Theatre.