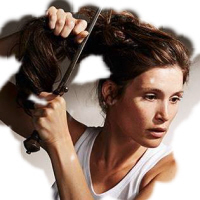 When other actors have had Hollywood commitments this year, Gemma Arterton's turned them into opportunities: When Gugu Mbatha-Raw couldn't make the transfer of Nell Gwynn she stepped in, and now that Cush Jumbo's one-season stint on The Good Wife has turned into a spin-off, she's left another juicy lead free for Arterton to grab with both hands, taking over as Bernard Shaw's Saint Joan at the Donmar. Following Henry V's military success, much of France is ruled by England, and though they fight back the odds always seem to be against the French army. That's until Joan's combination of guileless charm and forcefulness makes them take the gamble of letting a young girl who claims to hear the voices of saints, take command of the military. She quickly does everything she promised, getting the Dauphin (Fisayo Akinade) his overdue coronation, and control of much of his country. But with her job done, Joan is a liability.

Her claim to directly intercede between god and the Dauphin threatens the power of the Church as well as that of the aristocracy who advise the court, and a meeting between French Bishop Cauchon (Elliot Levey) and the English Earl of Warwick (Jo Stone-Fewings) seeds a plot to destroy her. 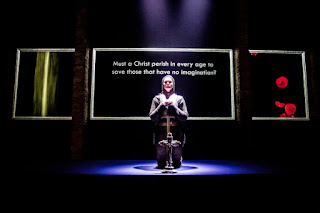 Even people close to Joan are concerned - General Dunois (Hadley Fraser) fought and won battles beside her but thinks her success has masked the many French lives she's casually put in danger. She's put up in front of the Inquisition accused of heresy and witchcraft, in a climactic trial scene that's tautly handled - but in a production that's otherwise very mixed. A play that, if performed in its entirety, would run for over four hours has been mercifully cut down, although the fact that it's made up of very long individual scenes is still keenly felt. 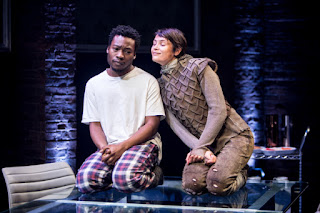 Arterton's Joan cuts quite an enigmatic figure in her beatific simplicity; it's only when the reality of her impending execution hits home that she's revealed as the out-of-her-depth country girl some always suspected her of being. She's not let down by the rest of the cast, with Akinade's man-child Dauphin memorably grotesque and petulant. Niall Buggy's Archbishop is a seemingly strong ally but one with a dangerous tendency to flip-flop in his allegiances, while even among the vitriol of the Inquisition Joan manages to convince Arthur Hughes' Brother Ladvenu that she needs to be protected. 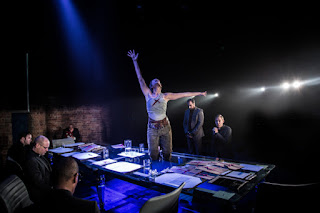 But it's in the attempts to highlight the contemporary relevance that Josie Rourke's production comes unstuck, despite the fact that at times the script feels almost terrifyingly current: A stage full of men conspiring to silence a lone woman will never not be topical but it's the connections to Brexit and other nationalist movements that are most striking. Joan's own patriotism is firmly of the school that the French should stay in France and the English in England, while there are moments where, having only seen this play once before, I wouldn't want to swear that Rourke hadn't actually added lines as well as cutting them: A line about how in English, the word "traitor" actually means anyone who doesn't prioritise nationalist interests above everything else, could have come out of a satirical article about a current issue of the Daily Mail - a paper that, of course, Richard Cant's poppy-wearing de Stogumber reads, a little-Englander vicar frothing at the mouth as he demands violent measures he doesn't remotely understand the reality of; seeing the effects of his actions will destroy him. Rory Keenan's Inquisitor, meanwhile, is a slick American brought in to streamline the angry French and English accusations into something that will calmly doom Joan. 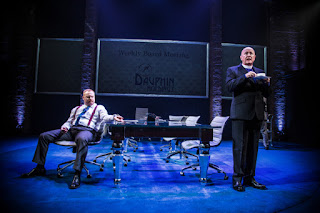 Given all of the above, the relevance should basically handle itself, so the way Rourke pushes it turns into an extraordinary act of self-sabotage: The audience enters to a mediaeval-looking scene of Arterton praying, but once the play starts the tablecloth is pulled away from the altar to reveal a glass boardroom table. Robert Jones' modern-dress design should be more than enough to make the point, and most of the parallels are obvious, so why Rourke has aggressively focused on the one parallel that makes the least sense - the war as a stock market, the sort of thing that sounds good in theory but ends up being constantly contradicted by the text - is a mystery. The stage is dominated by Duncan McLean's heavy-handed projections - counterpointing dramatic moments with religious paintings depicting the scene in question is fine, but why are the English backed by paintings of Georgian-era soldiers? It's one of those moments that's probably meant to illuminate something but instead is baffling and distracting, as you're too busy trying to figure out what on earth the production's trying to say, to actually pay attention to the scene. (As for the animation of a crown circling a dolphin to represent the Dauphin's coronation, it's one of the tackiest things I've seen on stage for a long time.) The ever-moving slow revolve is a good touch though, as it constantly changes the sightlines in a theatre where it's easy to get stuck looking at an actor's back the whole evening. 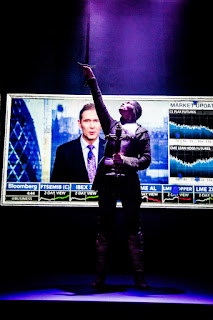 So this is a play about an actual war followed by a political battle, and the biggest fight ends up being the production struggling against its own high concept. On the one hand Rourke has come up with an intelligent and concisely relevant edit of the text, and assembled a strong cast who do sterling work; but they're fighting against a high concept that's overly literal, sometimes patronising, and often distracting. The cast win, but only just.

Saint Joan by Bernard Shaw is booking until the 18th of February at the Donmar Warehouse.